The Return of the Jedi 40th Anniversary will kick off with an exclusive The Black Series Admiral Ackbar release available first at MCM Comic Con (October 28-30th), and then widely released (while supplies last) on November 2nd. Head on over to Jedi News for the full reveal and details! 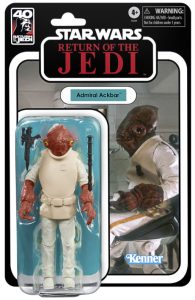 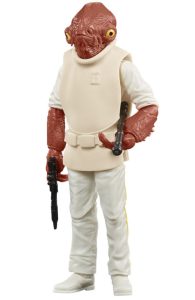 The Vintage Collection: The Ninety Six - RETURN OF THE JEDI Admiral Ackbar

Welcome to another entry in our The Vintage Collection: The Ninety Six column. Hasbro recently committed to collectors that they will be “focusing” on characters in The Vintage Collection that fall under “The Ninety Six” banner. If you’re new to this, it means that there needs a modern counterpart for every classic Kenner figure. Between 2020 and 2021, Hasbro’s made an admirable effort by focusing on these characters. But there is more work to be done, and we’ll figure out where we are step by step. Today we assess Admiral Ackbar. 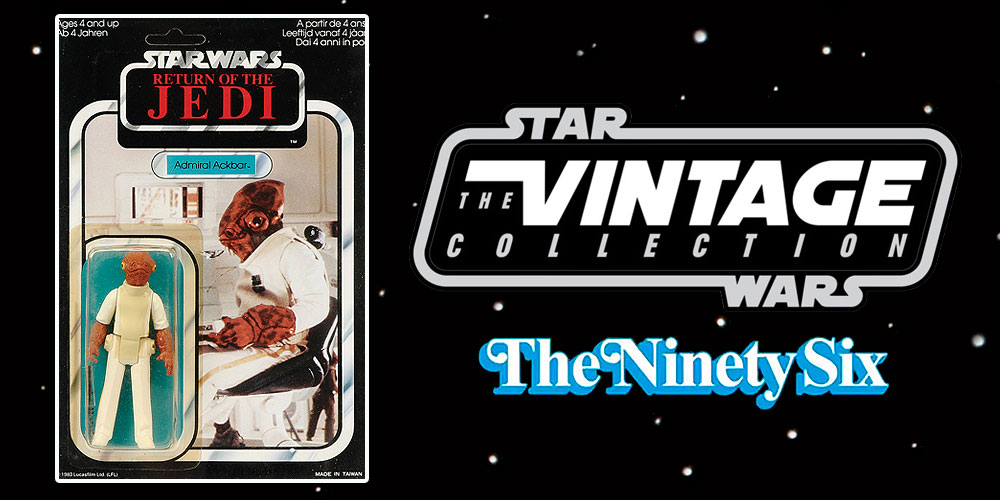 END_OF_DOCUMENT_TOKEN_TO_BE_REPLACED

Everything You Need To Know About The Vintage Collection Admiral Ackbar (VC22) Re-release!

The Vintage Collection Admiral Ackbar (VC22) re-released figure looks pretty good, albeit a little too dark. Unfortunately, Hasbro didn’t correct the color of the nameplate and figure backer. (NOTE: This gallery is incomplete. Only the new figure is shown. We will update the gallery at a later date and post an update.) Check out this excellently updated figure in our RDRs now! There’s more difference here than you may realize.

END_OF_DOCUMENT_TOKEN_TO_BE_REPLACED

Today we revisit Admiral Ackbar. The first mail-away figure from the Return Of The Jedi line, not much changed from the 1983 ROTJ Kenner card art to the Trilogo card art. See the full card art and additional notes by revisiting 1983’s RETURN OF THE JEDI Admiral Ackbar figure HERE.

We have another Visual Guide update from the new The Black Series [Phase IV] line. Click below to check out Admiral Ackbar (ROTJ01). We also have a full review of this figure in our review database right here. 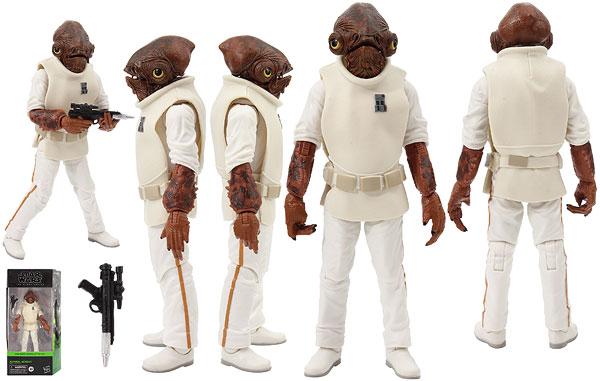 We should have fallen in love with Admiral Ackbar, but we didn’t. It has a near-perfect sculpt, but the articulation is wonky, and the deco is off. Hasbro brought back that awful “open mouth” feature which means no head movement again. Also, why is the head so much darker than the arms? And the waist articulation makes it difficult to pose the figure. But if you just pose the figure out of the box, you probably won’t care about the issues. (more….) 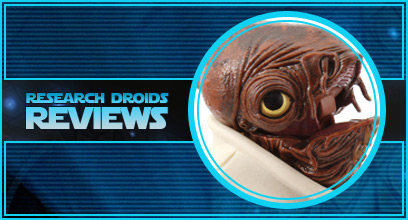 END_OF_DOCUMENT_TOKEN_TO_BE_REPLACED

Let’s move forward with JTA’s The Power Of The Force “2” Silver “Jubileap” Celebration! We’re looking at some of the better “green” repacks! Next up is Admiral Ackbar which is a collector-favorite! See more in our Research Droids Reviews today! Be sure to leave your thoughts in our comments section, vote in the poll or comment about it on our Facebook page. Click the banner below for the direct link to the review! As always, you can also send your review requests via email if you’d like to see something that we didn’t cover yet. 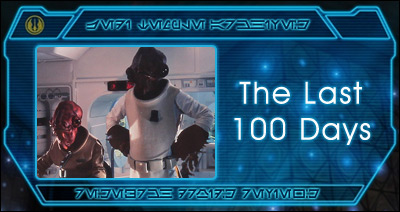 After two months of Triple Force Friday products it’s time to return to the Collector Series line. Let’s start it up with Admiral Ackbar again. He’s the focus of our Research Droids Reviews today! Be sure to leave your thoughts in our comments section, vote in the poll or comment about it on our Facebook page. Click the banner below for the direct link to the review! As always, you can also send your review requests via email if you’d like to see something that we didn’t cover yet.

Tim Rose, who was a puppeteer in Return of the Jedi and performed as Admiral Ackbar, Sy Snootles and Salacious Crumb, and who returned in both The Force Awakens and The Last Jedi as Admiral Ackbar once more, only this time actually inside a suit, was recently interviewed by Jamie Stangroom. Jamie’s YouTube Channel is still very unknown, he has very few subscribers and his videos don’t really have that many clicks, but over the time he interviewed quite a few Star Wars actors. Jamie also brought Ahmed Best to the forefront again, when he interviewed the Jar-Jar actor, this made quite a few waves back then when it was revealed just how devasted Ahmed felt at the time. And now Jamie interviewed Tim Rose. In the first half of the interview Tim shares a funny anecdote about filming Return of The Jedi, but then he talks about his experience on set of The Last Jedi and how he felt about being killed off unceremoniously. Spoiler: he was very disappointed. Watch the interview clip and then click through for a discussion!

END_OF_DOCUMENT_TOKEN_TO_BE_REPLACED

Nothing So See Here Move On, Move On...

I originally reported that the short interview with Tom Kane had been cut from the official recording of the livestream on the Star Wars YouTube channel. Several people commented that the clip is missing, I checked the recording by scrubbing through it two or three times and didn’t find it. But apparently it’s still there. Maybe I was just blind and didn’t see it. Anyway, you can find the clip around the 6 hour 36 minute mark. Nothing was deleted. Apologies for the confusion! 🙂

Well, I am not sure if Tom Kane is going to have a job after this. During an interview at Star Wars Celebration, he stated that for the last six years he’s voiced Admiral Ackbar. And he immediately explained his disdain for his character’s death in The Last Jedi. He said (paraphrased) “And I was not really thrilled how they blew him up outside of the ship. And I’m like who’s this Holdo woman? And nobody knows this. No one invested in this. Who is she? Why is she saving the fleet?” before the host interrupted him to change topics and looked nervously doing so. The host’s expression is classic. See the clip yourself before it gets edited out at the 3 hours 49-minutes mark of the live feed on YouTube.

END_OF_DOCUMENT_TOKEN_TO_BE_REPLACED

Our “Jabba Don’t Preach” marathon begins with the fan-favorite Admiral Ackbar figure. It was the first figure in the Return Of The Jedi line and started off as a mail-away figure. Relive your memories of this classic 1982 action figure in our Research Droids Reviews today. Be sure to add your own experiences to the conversation! Reminisce your own childhood stories of this figure in our comments. Share your life-changing vintage Kenner adolescent experiences with us!

It's An Exclusive Trap!

Has your local Toys R Is store been collecting Admiral Ackbar/First Order Officer two-packs? While easily one of the nicer exclusives to support Star Wars Episode VIII: The Last Jedi, perhaps the combination of characters didn’t make sense. JTA reader Keven M. suggest Hasbro should have done a “Mon Calamari” two-pack instead to include Admiral Raddus from Rogue One: A Star Wars Story. We imagine that set would have sold infinitely better. Anyway, let us know if you’re experiencing the same pile-ups in your area as well. 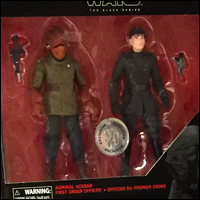 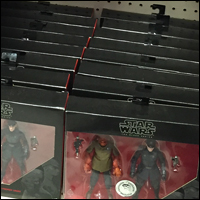 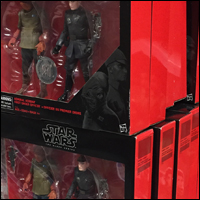 END_OF_DOCUMENT_TOKEN_TO_BE_REPLACED

We have another 6-Inch The Black Series [Phase III] Visual Guide update tonight. Click below to have a look at our guide page for the Toys R Us exclusive Admiral Ackbar/First Order Officer set. We also have our detailed review of this set right here. 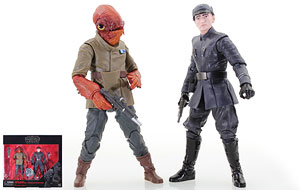 The Toys R Us exclusive Admiral Ackbar/First Order Officer two-pack turned out to be better than we first thought. See why, although not perfect, it looks amazing in our Research Droids Reviews today! Be sure to leave your own thoughts in our comments section, vote in the poll or even leave comments about it on our Facebook page. Click the banner below for the direct link to the review! As always, you can also send your own personal review requests via email if you’d like to see something that we didn’t cover yet.

We just received our sample of the Toys R Us exclusive Admiral Ackbar/First Order Officer two-pack which is part of The Black Series [Phase III] 6" line. The review is coming soon, but you can check out the gallery now! 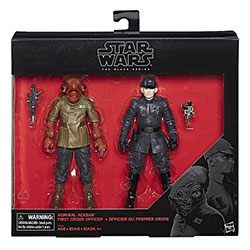 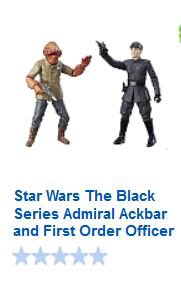