It’s fantastic some Walmart stores are getting the latest TVC figures. But it’s been over a month now, and TARGET hasn’t received a blessed restock of TVC figures in about eight of the ten TARGET stores in my area. What DOES arrive in stores and sit are the latest The Black Series [Phase III] 6″ figures. The same figures haven’t been touched by 6″ collectors. Why? Online? What’s the excuse? Hasbro: Stores, well, the ones that decided to still carry TVC mind you, are SCREAMING for more figures. Why is it so difficult to fill the pegs? For the record, in the Star Wars aisle at this particular TARGET in Princeton NJ there are seven TVC Snokes rotting. (The image below shows the end cap.) 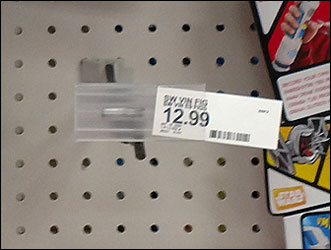 Next Article: The Deafening Silence Of The Sequel Trilogy