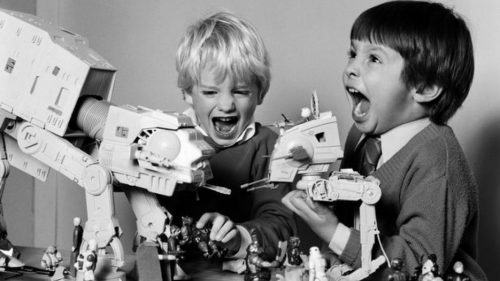 END_OF_DOCUMENT_TOKEN_TO_BE_REPLACED

Let’s look at another Forces Of Destiny release: Padmé Amidala. It’s pretty fun. Learn more in our Research Droids Reviews today! Be sure to leave your thoughts in our comments section, vote in the poll or even comment about it on our Facebook page. Click the banner below for the direct link to the review! As always, you can also send your review requests via email if you’d like to see something that we didn’t cover yet.

We are going to catch up on a couple of Forces Of Destiny figures. Let’s start with Luke Skywalker & Yoda. It’s better than you think it is. Learn more in our Research Droids Reviews today! Be sure to leave your thoughts in our comments section, vote in the poll or even comment about it on our Facebook page. Click the banner below for the direct link to the review! As always, you can also send your review requests via email if you’d like to see something that we didn’t cover yet.

END_OF_DOCUMENT_TOKEN_TO_BE_REPLACED

MORE NEW FIGURES! Let’s check out the Chewbacca And Porgs Forces Of Destiny set. It’s adorable. See it in our Research Droids Reviews today! Be sure to leave your thoughts in our comments section, vote in the poll or even comment about it on our Facebook page. Click the banner below for the direct link to the review! As always, you can also send your review requests via email if you’d like to see something that we didn’t cover yet.

Now it’s time to check out a sneak peek at our upcoming Chewbacca And Porgs Forces Of Destiny review, or should we say Chakabacca And Porgs instead? It’s cute, but this doesn’t favor Chewbacca too much. And yes, the porgs are so cute you’re going to want to eat them up. Check this set out in our Research Droids Reviews right now! Full review coming as soon as possible! 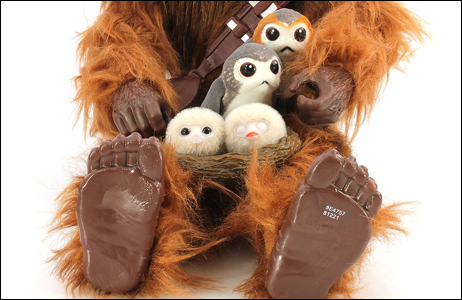 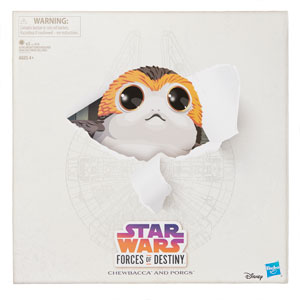 END_OF_DOCUMENT_TOKEN_TO_BE_REPLACED

Forces Of Destiny Ahsoka Tano Back In Stock At Hasbro Toy Shop!

If you’re interested, the Forces Of Destiny Ahsoka Tano figure is back in stock at Hasbro Toy Shop. Special thanks to JTA reader Mark for the alert!

A previously unrevealed Forces Of Destiny product has hit eBay, and it’s already going for crazy money. JTA reader Michael F. alerts us to a Padme Amidala based on her Episode I and Episode II outfits. It remains to be seen if this will make it out as Forces Of The Destiny has hit a wall at retail. It’s a beautiful set. Hopefully, it’s waiting in the wings somewhere. 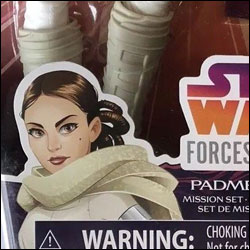 The beautiful Ahsoka Tano from the Forces Of Destiny line is IN STOCK at Hasbro Toy Shop. See if you can still use promo code HANSOLO for 15% off and FREE shipping! Special thanks to JTA reader Mark for the alert!

Does Forces Of Destiny Have A Future?

Forces of Destiny premiered in March 2017 on YouTube on the official Disney Channel. It was a first for Star Wars, since the animated show was primarily targeted at girls. A toyline was launched as well. In this article I want to take a closer look at the YouTube views for each episode and what this might tell us about the popularity and potential future of the show. Also, we will see which characters are fan favorites and which ones not so much. Click through to learn more! 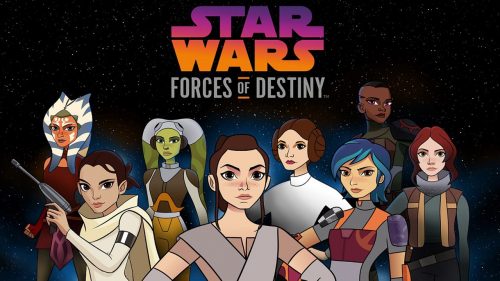 END_OF_DOCUMENT_TOKEN_TO_BE_REPLACED

HUNDREDS Of Toys 50% OFF At TARGET.com; Includes MANY Star Wars Items

HUNDREDS of toys are 50% OFF at TARGET.com and many of them are Hasbro Star Wars items. Great deals include Luke SKywalker (Ahch-To Island) and Kylo Ren’s TIE Silencer. Many ore details can be found as well. FREE 2-DAY SHIPPING is also included for MOST items. Special thanks to JTA reader Jon M. for the alert! 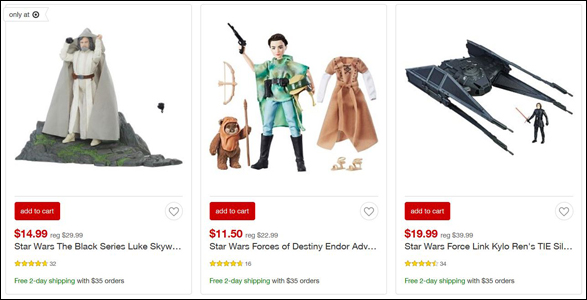 Disney has released some info on the upcoming Forces Of Destiny YouTube Episodes. The new season with 8 episodes will begin March 19th. Click here to find out what characters will make an appearence in the show! 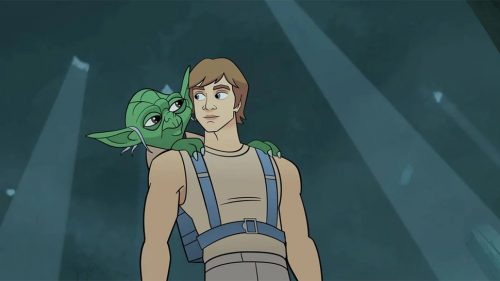 END_OF_DOCUMENT_TOKEN_TO_BE_REPLACED

Posted in Movie and TV News
Tags: Forces of Destiny

If you’re interested, Walmart.com has the Forces Of Destiny Kylo Ren & Rey two-pack in stock with FREE 2-Day shipping. They also have quite a few 3.5″ super-articulated action figures for $4-$5. Check it out! Thanks to all who wrote in to let us know! 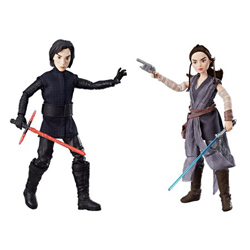 Kylo Ren & Rey Forces of Destiny In Stock At HTS!

The long advertised Rey of Jakku and Kylo Ren Forces of Destiny 2-pack is finally now in stock at HasbroToyShop.com! Thanks to JTA reader & friend Charlie for the heads up! 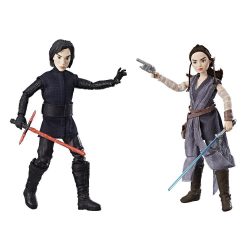 Forces Of Destiny Luke Skywalker In Stock At HTS!

The Forces of Destiny Luke Skywalker and Yoda is now in stock at HasbroToyShop.com! You can use promo code WINTERSALE18 to save 10% and get free shipping on orders over $29 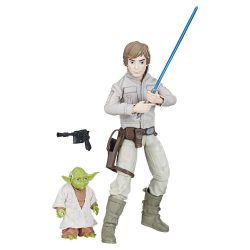 Forces Of Destiny Padme Amidala Not Cancelled According To EE

Cancelled Forces Of Destiny figures? Are you crazy? Actually, Entertainment Earth has just relisted Padme with a March 2018 release date now. We have heard that many of these were much too far into progress to just cancel them. Order now if you want her! Hopefully this one won’t get cancelled too! 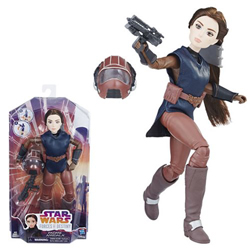 If you have been having your Forces Of Destiny Princess Leia Organa and R2-D2 set continually cancelled by ToysRUs.com, we have learned right from the source that this retailer is not getting stock. (We’re not entirely sure if that means just onlint or both online and brick and mortar. We just received word that it’s not coming.) If you’re waiting for it, you should probably order it from other sources like GameStop or Entertainment Earth. 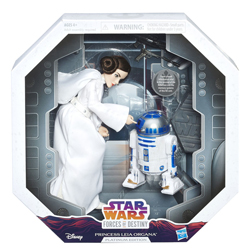 Forces Of Destiny Chewbacca IN STOCK At Amazon

If you’re interested, the Forces Of Destiny Chewbacca is IN STOCK with Prime on Amazon. Special thanks to JTA reader Rob for the alert! 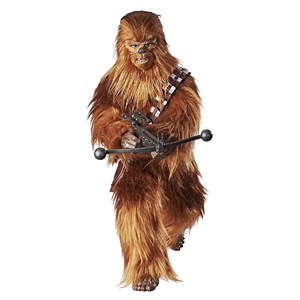 For tonight’s Visual Guide update we are adding the Forces of Destiny Sabine Wren basic figure. Click below to check out the full guide page. You can also find our full review of this figure right here. 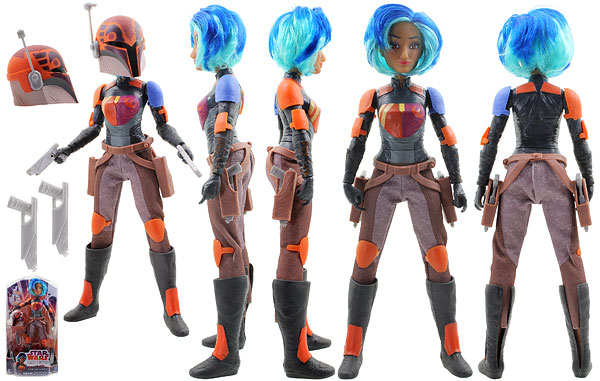 We’re catching up with the Forces of Destiny line for our Visual Guide update tonight with the addition of the Princess Leia Organa & Wicket the Ewok (Endor Adventure) set. Click below for a complete look at this guide. You can also check out our full review right here. Thank you, Hasbro and Litzky Public Relations for providing us with this sample. 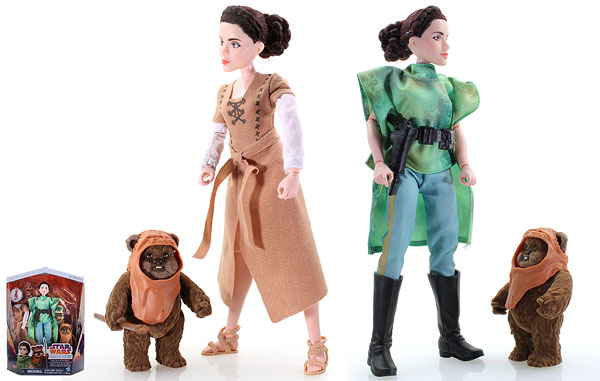 Gamestop.com is having a Buy One Get One 50% off deal and you can order the new Forces Of Destiny Platinum Edition Princess Leia on sale for only $43 (or Roaring Chewbacca for only $23) or get two of them for $65! Better yet, you can mix and match with Pops! and a TON of other Star Wars collectibles. Supreme Leader Snoke (Throne) is $31.99. 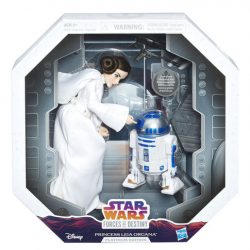 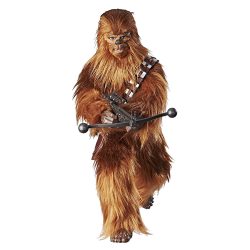 Luke Skywalker Up For Pre-Order At Entertainment Earth

You can pre-order the Luke Skywalker (with Yoda) Forces of Destiny from Entertainment Earth with a February release. 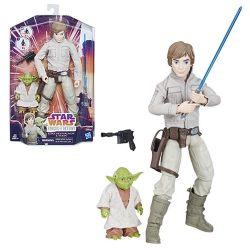 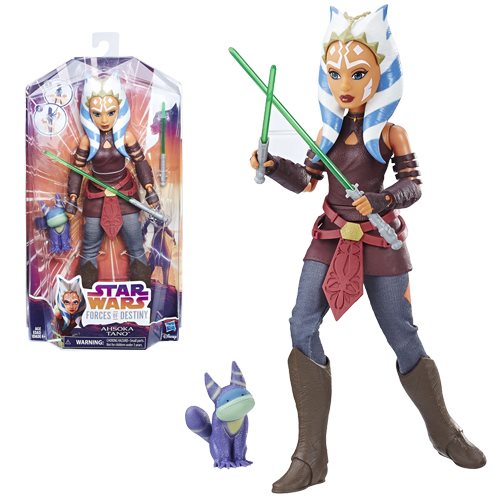