To no one’s surprise after the accidental leak on Hasbro’s very own HasLab page a few days ago, the brand new Reva Force FX lightsaber HasLab was also revealed at the Hasbro panel! Price is $499.99, the campaign ends on July 11th. 5,000 backers are required to make the lightsaber a reality. There will be NO tiers!

I would say this could be do-able, since there are quite a few cosplayers and lightsaber collectors out there. But we will see how much momentum the campaign will have after the weekend is over! $499.99 for a saber that won’t even let you fly around like a helicopter is still a lot of money after all! 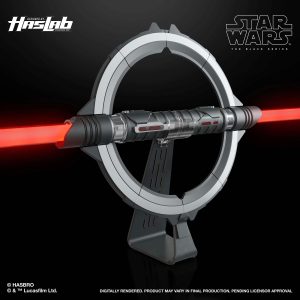 You can back your Reva lightsaber on the HasLab page!

Are you interested in the new Star Wars HasLab or is it nothing for you? Let us know in the comments!