Welcome to another entry in our The Vintage Collection: The Ninety Six column. Hasbro recently committed to collectors that they will be “focusing” on characters in The Vintage Collection that fall under “The Ninety Six” banner. If you’re new to this, it means that there needs a modern counterpart for every classic Kenner figure. Between 2020 and 2021, Hasbro’s made an admirable effort by focusing on these characters. But there is more work to be done, and we’ll figure out where we are step by step. Today we assess Han Solo (Hoth Outfit). 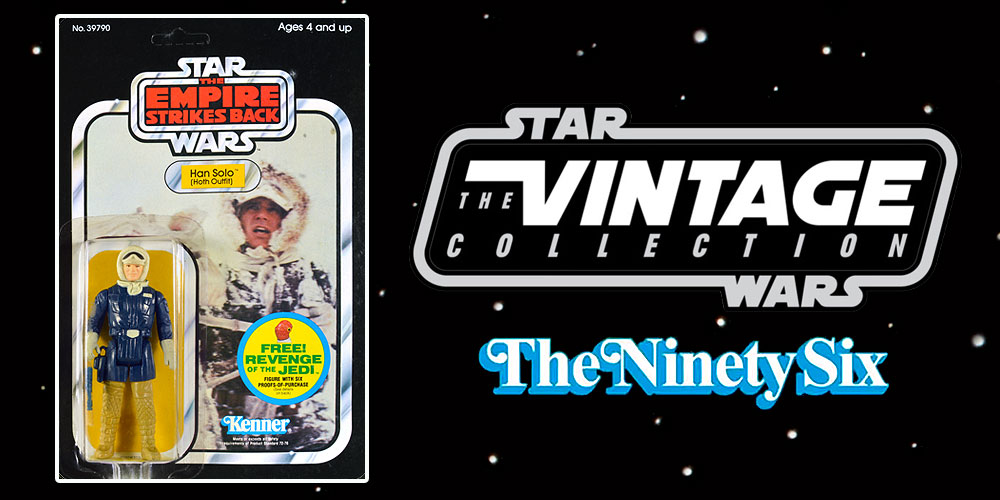 Is there a definitive modern counterpart to 1980’s ESB Han Solo (Hoth Outfit)?

No. To date, a Han Solo (Hoth Outfit) figure that meets this definition is only part of the “VINTAGE” THE SAGA COLLECTION line, a precursor to THE VINTAGE COLLECTION. Hasbro released 2007’s VTSC Han Solo (Hoth Outfit), and although an admirable action figure, it doesn’t come too close to meeting collectors’ needs for a definitive action figure. The modern counterpart should come with the hood “up” or, at best, come with an interchangeable portrait to offer collectors this option.

We’re still waiting for Hasbro to add this figure into THE VINTAGE COLLECTION. It’s not a high-priority addition for the line since we have the VTSC version and many other versions of this character, but we still need one. It’s a bit grim to think that some of Hasbro’s 5POA versions of his figure are better than a collector-focused version in Kenner-inspired packaging (like Han Solo from 2015’s REBELS Luke Skywalker/Han Solo (MS15) MISSION SERIES set, for example).

Yes and no. Hasbro could be lazy and reissue the VTSC figure in THE VINTAGE COLLECTION packaging. That would disappoint almost everyone. But collectors would appreciate them taking another stab at this character for accuracy, whether it be an all-new figure from the “ground up” or retooling existing parts.

What does Hasbro have to do so we can check off “Han Solo (Hoth Outfit)” from our Vintage Vs. Modern checklists?

Hasbro needs to revise the 2007 VTSC figure or tool an all-new figure that more faithfully captures the on-screen likeness of this character from THE EMPIRE STRIKES BACK for THE VINTAGE COLLECTION.

Next Article: Should Hasbro Have Used Card Art Based On Kenner's Animated Lines For The Tartakovsky Clone Wars Figures?