The Vintage Collection: The Ninety Six - THE POWER OF THE FORCE Imperial Dignitary

Welcome to another entry in our The Vintage Collection: The Ninety Six column. Hasbro recently committed to collectors that they will be “focusing” on characters in The Vintage Collection that fall under “The Ninety Six” banner. If you’re new to this, it means that there needs a modern counterpart for every classic Kenner figure. Between 2020 and 2021, Hasbro’s made an admirable effort by focusing on these characters. But there is more work to be done, and we’ll figure out where we are step by step. Today we assess Imperial Dignitary. 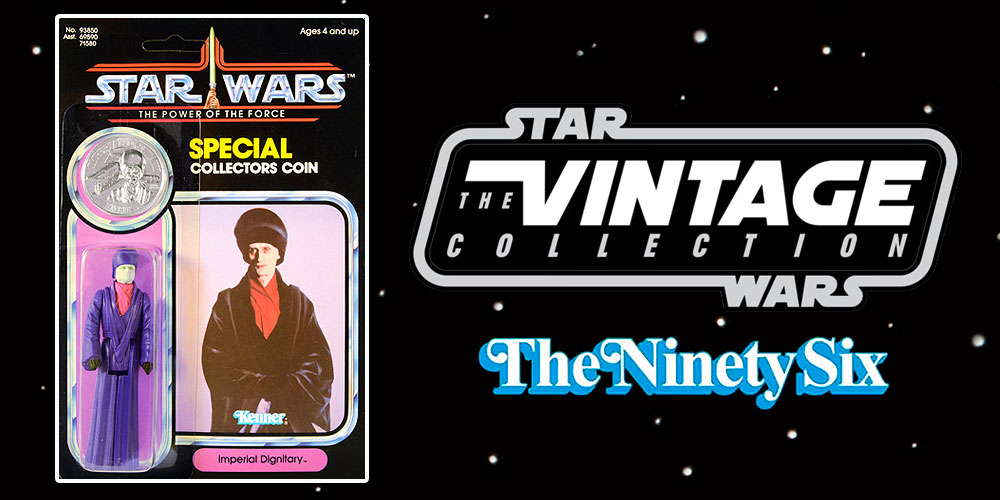 THE POWER OF THE FORCE Imperial Dignitary

Is there a definitive modern counterpart to 1985’s POTF Imperial Dignitary?

1985’s POTF Imperial Dignitary is one of the few The Ninety Six Kenner figures Hasbro never updated in the modern line.

No. It’s a crime. And there is no excuse at this point. Imperial Dignitary, Sim Aloo, made it to a recent Fans’ Choice Poll finals, and collectors are desperate to have this character part of THE VINTAGE COLLECTION.

Does THE VINTAGE COLLECTION release completely satisfy the modern counterpart to 1985’s THE POWER OF THE FORCE Imperial Dignitary figure?

Hasbro has yet to add this figure to THE VINTAGE COLLECTION.

There is no modern figure of this character, and Hasbro would need to tool an all-new figure. In the past, Hasbro produced Imperial Dignitary Janus Greejatus (Death Star Procession) (’03 #35) and Imperial Dignitary Kren Blista-Vanee (Death Star Procession) (’03 #41) for the STAR WARS “SAGA” [PHASE III] line. But neither represents the character Sim Aloo.

What does Hasbro have to do so we can check off “Imperial Dignitary” from our Vintage Vs. Modern checklists?

It’s becoming exhausting to keep asking Hasbro, but they need to tool an all-new Imperial Dignitary action figure and place it on either a RETURN OF THE JEDI or THE POWER OF THE FORCE card.