A while ago we talked about Star Wars toy prices and whether or not collecting is becoming increasingly expensive. Today I look at vintage toy prices from back in the day and then compare them to modern toy prices. How much of your money did you need to spend back in 1978 or 1980 to buy a Star Wars toy compared to 2020? Has the available income kept pace with or even outpaced Star Wars toy prices? Click through to find out!

UPDATE: chart of the consumer price sub index for toys has been added to show you how prices for toys have developed in past decades. 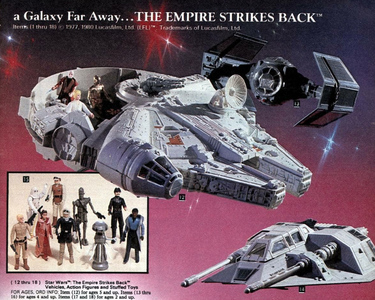 So here’s what I did. I dug up old toy catalogues, mostly Sears, and then I looked up the median household income for the US to see how much of that median income was spent on something like a Millennium Falcon. The idea was to find out if back in 1978 etc you spent more or less money, relatively speaking, on Star Wars toys than today. Inflation plays a huge factor here, of course, but of course the Star Wars toys we get today are also more detailed and often bigger than the toys we got back in the day. So comparing a 1978 Millennium Falcon to the current TVC Millennium Falcon for $399.99 is certainly not entirely a fair comparison, but nevertheless, I believe it should provide us with a good idea about how much more we need to spend on Star Wars toys today. 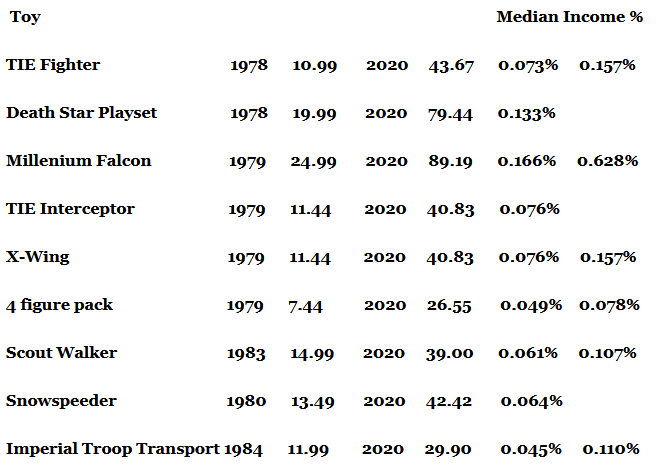 So what do you see here? Let’s look at the X-Wing! In a Sears catalogue from 1979 the toy was $11.44, that would be $40.83 in today’s dollars. Back in 1979 the X-Wing cost you ca. 0.076% of the annual US median household income, in 2019/20 the current X-Wing toy (released in late 2019) costs you 0.157% of the annual US median household income. In other words, you have to spend more than twice the relative amount of money today than in 1979. Adjusted for inflation the Kenner X-Wing would only be ca. $41 instead of $100. Star Wars toys have greatly outpaced any inflation and Star Wars toy prices have also outpaced any actual growth in annual household income.

Most prices for current Star Wars toys are at least 2x more expensive than they were back in the day, adjusted for inflation. Now of course many things have changed, production costs have increased, the toys themselves have become more detailed, receive more paint apps, tooling is more expensive and the toys are often (somewhat) bigger. But the question is, do all these improvements justify the substantial price increase? Is an X-Wing in 2020 more than two times better than the original Kenner X-Wing?

Also, it’s not all that common that things get more expensive over time, many things, think TV sets or electronic gadgets in general, become more affordable over the years. You had to work longer back in 1979 for a TV set than you have to in 2020, for example, and a 2020 4k TV set is infinitely superior to some old CRT color tv set from the late 1970s. It is interesting to see that toys, and especially Star Wars toys, are a huge exception here. Sure, they are better looking than 40 years ago, but they have become a lot more expensive along the way.

So what do you think? Do you think the modern Star Wars toys are that much better than the vintage counterparts that the much higher MSRP (adjusted for inflation) is justified? Or do you feel Disney and Hasbro should aim to make things more affordable again? Where do you rank your vintage Kenner toys, when we talk about value for money? How much more money is an updated and better looking X-Wing worth to you? Do you feel you got more value for your money back in the late 1970s and early 1980s or do you get more value for your money today with photoreal paint apps, much better looking figures and more realistically scaled vehicles with enhanced details?

UPDATE: after some feedback in the comments I decided to take a look at the consumer price sub index for toys, which will give you an idea about how prices for toys have developed in the US in past decades. The following graph will show you how the CPI for toys has developed over time.

Source for the graph is the Federal Reserve Bank of St Louis website that provides charts for all the sub indices.