The Rise Of Skywalker D23 Sizzle Reel Has Been Released

This morning the official Star Wars YouTube channel released the much talked about D23 footage for The Rise of Skywalker! Click through to watch the video, for screenshots of several highlights and a short analysis! If you want to know nothing, then please stay away from this article. Some potential spoilers and rumors will be discussed!

This is the D23 footage:

For a video about an upcoming movie this D23 reel is heavily focused on what came before.

45 seconds of the footage are dedicated to an extended OT/PT flashback
17 seconds feature an ST flashback
35 seconds show new footage, somewhat less even, because of the several title cards displayed between scenes

I think this tells us that Lucasfilm will use both the Original Trilogy and Prequel Trilogy even extensively in the marketing of the movie. So that even the most casual fan and moviegoer will know that this 9th episode of the saga is the finale, the culmination of a movie series that began 42 years ago.

But let’s take a look at the highlights from the new footage shown in the footage!

Rey and friends attend a Burning Man festival in the desert

The question is if this desert planet is the same one on which Rey and Kylo’s TIE Fighter have a rendez-vous or if it’s yet another desert planet. This could also be the same desert planet where a battle between the Resistance and First Order is taking place, as seen in the first teaser trailer.

This looks like a highschool reunion. Let’s see… X-Wing, Blockade Runner, Millennium Falcon (or not, the hamburger patty shaped ship does look a bit too different on closer inspection!), Y-Wing, A-Wing and what seems to be B-Wing (click the screenshot for the larger version!). The fleet seems to materialyze out of hyperspace in the atmosphere of a planet and not in space.

You can never have too many ships! 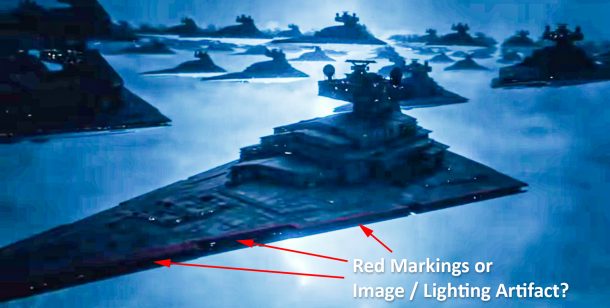 It has also been suggested that the Star Destroyers may have red markings. If you brighten up the screenshot a faint reddish marking on the edge of the fuselage appears. However, I am not 100% convinced this may not be an artifact produced either by the lighting in the scene or by brightening up the image so drastically from a source with so little dynamic range that brightening up the image introduces all kinds of artifacts. But judge for yourself!

And it seems the Star Destroyers are equipped with an all new weapon. It’s entirely possible the devastating impact of a laser weapon on the surface of a planet is by caused by one of these.

Rumors say that C-3PO gets his once deleted memories re-uploaded. It appears something goes a bit wrong here… I suppose this may also be the cause for C-3PO wielding a bowcaster later on.

A good old-fashioned explosion. You can never have enough of those! If you click the screenshot to see it full size, please examine the scenery. Maybe they are trying to fool us with modern technology, but the scenery does look a lot like a miniature and not like something created in CGI. Of course you can always use CGI to fake a miniature look, something similar was done in Rogue One, when the Star Destroyers were made to look like models, even when they were not. But this could actually be a combination of practical effect and CGI, and not entirely digital. Given JJ’s penchant for all things practical that may actually be the case here!

Saber tossing for the advanced student

Rey is seemingly training with her lightsaber and a training remote. But she doesn’t hit the remote and instead murders a tree. Doesn’t she know trees bind carbon dioxide and produce oxygen and that cutting them down for sport is not good for the environment? On a more serious note, maybe JJ will give us a Rey training montage here that shows us how her powers develop (or have developed). Could this be set on Endor? Or is it some other jungle planet?

We know this scene, Kylo and Rey duel on what appears to be the Death Star wreckage. Rumors say that this duel will feature Force flashbacks and will be quite epic. However, this is not the finale of the movie.

Not available as an action figure on Triple Force Friday

And the money shot, so to speak. Dark Side Rey!
However, the official Star Wars website already spoiled it and confirmed what any reasonable fan already knows, this is a vision and not real. There’s no way Rey will turn to the dark side in the movie.

The saber is something like what the Jedi Temple Guards used in Rebels, it operates like a nunchuk.

It’s too bad we will probably not get Dark Side Rey as an action figure before 2022. If at all. Given Disney’s track record with keeping things secret from Hasbro. But it would certainly be a welcome surprise if Hasbro DID know about this version of Rey and has a figure in production already.

And here’s the lightsaber fully unfolded. Hasbro, please sculpt, produce and release that figure in record time! Thank you!

So, that was the D23 footage! Do you like what you see? Are you a bit more excited yet?

You can certainly tell that Lucasfilm is trying to make this look as epic as possible with as many callbacks to the OT and PT as possible. JJ Abrams certainly didn’t have an easy task with the movie, it’s only supposed to be the satisfying conclusion of a decade spanning saga that changed cinema forever when the first movie was released in 1977.

According to JJ a proper trailer is being worked on, but they are not quite finished yet. It should get released soon though, it’s less than four months until release of the movie. The marketing engine must start spinning soon to remind everyone that this is the one movie you must see this December.

Will you be there? Based on the things we know and based on the footage that has been released so far?