The Rise Of Skywalker D23 Sizzle Reel Has Been Released

This morning the official Star Wars YouTube channel released the much talked about D23 footage for The Rise of Skywalker! Click through to watch the video, for screenshots of several highlights and a short analysis! If you want to know nothing, then please stay away from this article. Some potential spoilers and rumors will be discussed!

END_OF_DOCUMENT_TOKEN_TO_BE_REPLACED

The Star Wars timeline saw a few cosmetic changes yesterday at D23. The three eras, that we, the fans, usually refer to as PT, OT and ST, have been given new names. Star Wars now has three “ages”, there is the Age of Republic, the Age of Rebellion and the Age of Resistance. You can also check out the potato cam quality photo of the presentation slide below, which indicates where each show and movie is on the timeline . The timeline also tells us that the new Kenobi show is set at the same time as the Solo movie, which could mean, in theory, that some characters from that movie might make a guest appearance. Perhaps Crimson Sun had business on Tatooine with the Hutts.
So, will you adopt the new names for the three major Star Wars eras? Or will it still be PT, OT and ST to you? It’s certainly shorter and less confusing than AoR, since all eras are now “AoR”. Also, it’s not entirely clear in what age The Mandalorian is set, this particular time period doesn’t seem to have a name yet, since the Age of Rebellion seems to end two years before the Mandalorian is set, or three years after Return of the Jedi.

The costume for the new Jet Trooper is on display at D23. The photo was posted on Reddit! And yes, we will get this trooper as an action figure, and also as a Lego Minifig (but please pretend you don’t know any of that, to make Disney happy on Triple Force Friday), so expect to see more of him after Triple Force Friday! How do you like the design of the new trooper? Helmet seems to be all new, armor design seems to be similar to the Sith Trooper, but the breastplate is new as well, it seems. Will you add him to your collection? 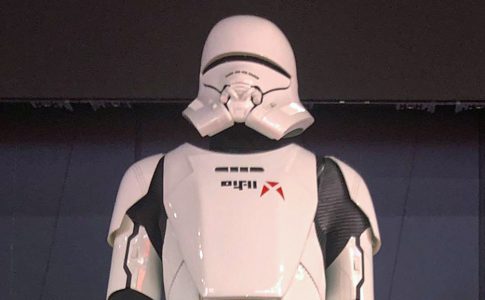 A brand new teaser poster for the upcoming Disney+ Star Wars series The Mandalorian was revealed today on the official Star Wars site! Click on the image below to see the full poster!

So what do we see here? Is that Tatooine? Twin suns… sandcrawlers… moisture vaporators… the scenery sure looks very familiar. What can all of that mean? Will the show take us back to one of the most famous Star Wars locations? A Mandalorian trailer is also coming, we will certainly know a lot more very soon! We will keep you posted!

No The Rise Of Skywalker At SDCC!

If you go to SDCC don’t expect too many news about the upcoming Star Wars movie. It has been revealed today that there will be no The Rise of Skywalker panel at SDCC. JJ Abrams and crew will not be in San Diego. They thought of ways to top the The Force Awakens panel from 2015, but couldn’t figure out a way to achieve that. So instead, they will save everything for D23, which will take place August 23-25. The question now is if a new trailer will also be revealed during D23, it would make sense.

There’ll be no rising at SDCC