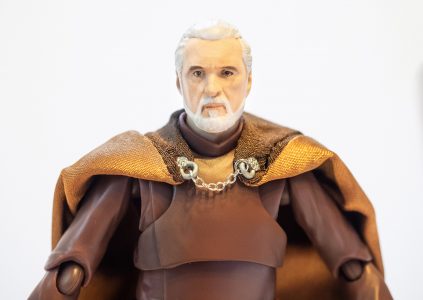 Disclaimer: I am somewhat lazy, also I don’t have a photo studio at home and no fancy diorama pieces, so don’t expect too much from the photos. They are meant to give you an overview of the figure.

So, how did the figure turn out?

In my opinion, the figure is ok. It has flaws (which will be pointed out soon) and SH Figuarts made some odd choices here and there, but overall the figure is still fun and Count Dooku fits right in with SHF Obi-Wan and Anakin.

I want to talk about the issues first, to get them out of the way. For this I want to show you the box art. 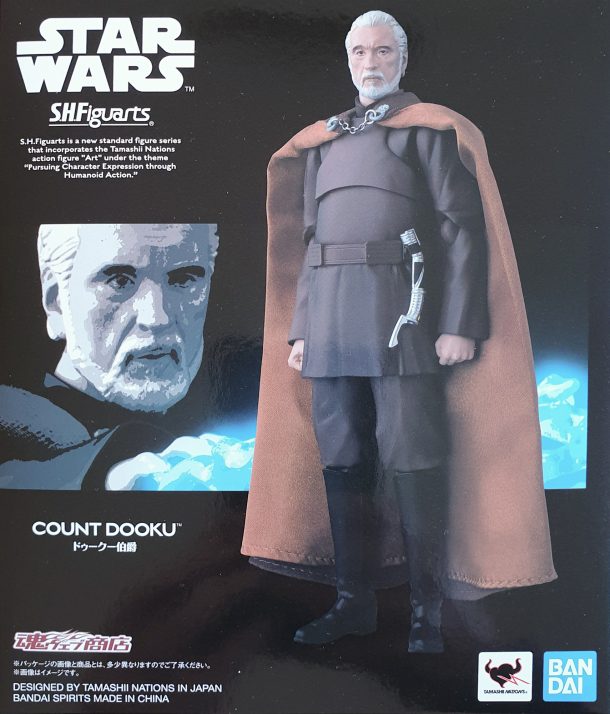 Dooku does look quite nice on the box!

And this is the actual figure once you unbox it: 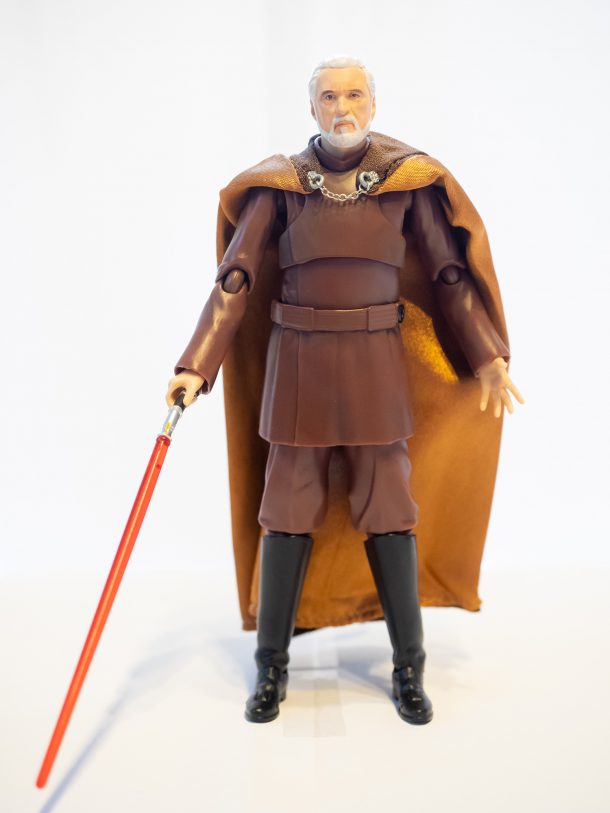 I tried to color correct the photo as best as I can with the equipment I have at home. Even a cursory glance will tell you that Count Dooku is very, very brown. Chocolate brown, to be precise. Now, it seems Count Dooku wore a slightly different costume in Revenge of the Sith and it may even be that the costume in ROTS was brown – but what’s important is what you actually see on screen, and here Dooku’s tunic was much, much darker, I would say it was more in line with what we see on the box. Now, it’s very likely SHF chose a very special light set-up and in a somewhat dimmer light the tunic is not as chocolate brown as here in daylight with some additional lights. But still, the color simply looks wrong, which is somewhat of a disappointment. Also, the tunic should be definitely darker than the pants and the tunic should also be darker than the belt, which it’s not. I wonder how SHF could overlook this detail. As I said, it may that the actual costume in ROTS looks like this, but it never looked like that in the movie.

Update: a good reference photo of Count Dooku in Revenge of the Sith was found, it’s from a Trumps Trading card. 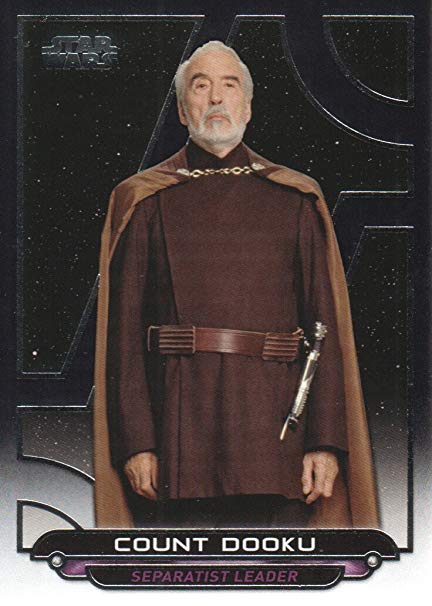 You can see that the Revenge of the Sith costume color pretty much matches the color of the SHF figure. So the brown is accurate. The only problem is that the tunic never looked like that in the movie, where it was much darker. But you can’t fault SH Figuarts when they match colors with the actual costume.

The figure has another flaw, unfortunately. The cape. 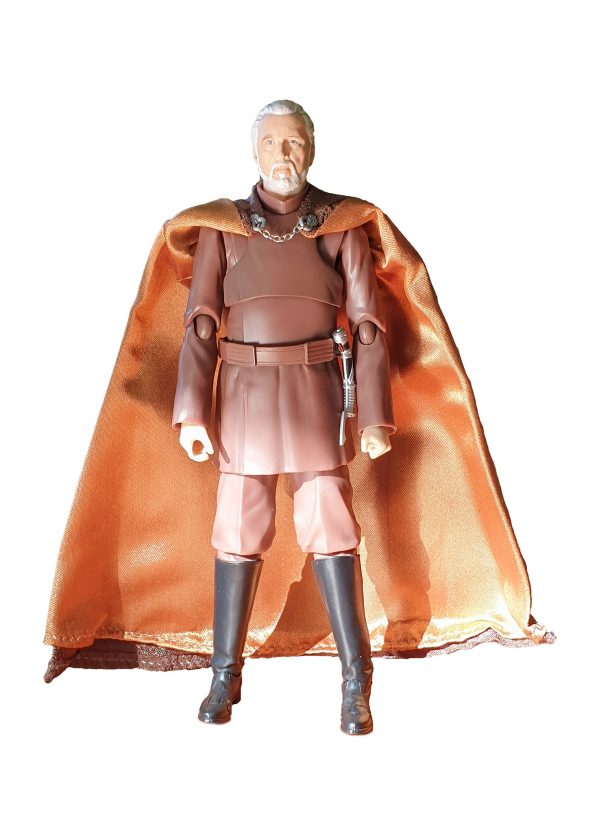 I took this photo a minute or so after unboxing Dooku (in sunlight). And as you can see the cape is huge, it has this weird triangular shape and while the cape itself looks and feels very nice and is made from quality materials, it is simply too large. And SHF didn’t put a wire in the seam, so you can’t drape the cape to make it look more natural. It’s simply too much cloth.

Also, while Dooku does have the cape draped behind his shoulders when he duels, he sometimes wears the cape around his shoulders. You cannot recreate that look here, though. SHF glued the cloth together, you cannot drape it over the shoulders. And you cannot remove the cape either, it’s glued in place. Which is not so bad, you would not want to remove the cape anyway. However, the chain looks very good, it’s not as huge as some other chains. Also, SHF went the extra mile and actually sculpted the ornamental bits to which the chain is attached, which is a very nice detail.

So here’s what I did, as you may have noticed in the previous photo the cape does look better, it’s straight behind Dooku’s back and not so triangular. I simply draped the cape behind Dooku’s back and used a paper clip to keep it in place. The cape has two separate layers of cloth and when you drape the cape just the right way you can position the clip so it’s not visible from any angle. That was an easy fix which took all but 10 seconds.

I wonder what it is with action figure companies and cloth capes. They usually are much too large and bulky, no matter where you look. Hasbro is no exception here. However, for a collectible figure which is a lot more expensive you’d expect the cape to be more accurate, i.e. less bulky, not so huge and at least with a wire at the bottom so you can drape it in a natural way. Using a paper clip is a last resort here. It works. But you shouldn’t do that really for a figure like this.

About the figure itself: the articulation is standard SHF. Dooku has butterfly shoulder joints, a somewhat unsightly torso joint, waist joint, drop down legs for extra range of motion, ball jointed neck with very good range of motion and the usual wrists. The SHF articulation is usually very fluid and you will never have trouble balancing the figure. It just works. Dooku makes no exception here.

I wonder if the torso joint was really necessary though, it does give you very good range of motion but it also breaks the sculpt in a very unfortunate way. It looks as if Dooku is wearing breast armor or a sports bra. I think a simple waist joint would have been the better choice here even if that means to sacrifice some articulation.

The elbows can be bent about 120 degrees or so. Dooku can touch his chin with his hand, that’s all you need really.

However, due to the nature of the sculpt the sleeves hinder wrist/hand articulation somewhat. Most of that is due to the light saber hilt Dooku uses. The curved hilt looks great, but when you put it in Dooku’s hand it will hinder wrist articulation, since the sleeve will be in the way. I don’t know how to change that really. But you still get enough articulation. You can move the hilt around a bit and when Dooku holds the saber more towards the lower end you get more articulation. 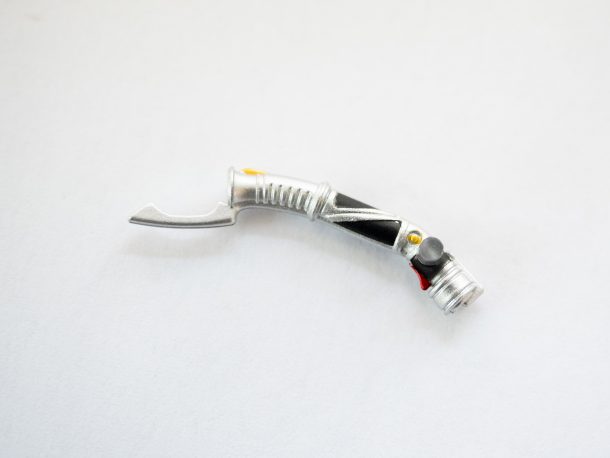 The hilt has a very crisp sculpt and great paint job

The hilt does look fantastic though. You do get one unlit saber to attach to Dooku’s belt and another saber with removable blade. 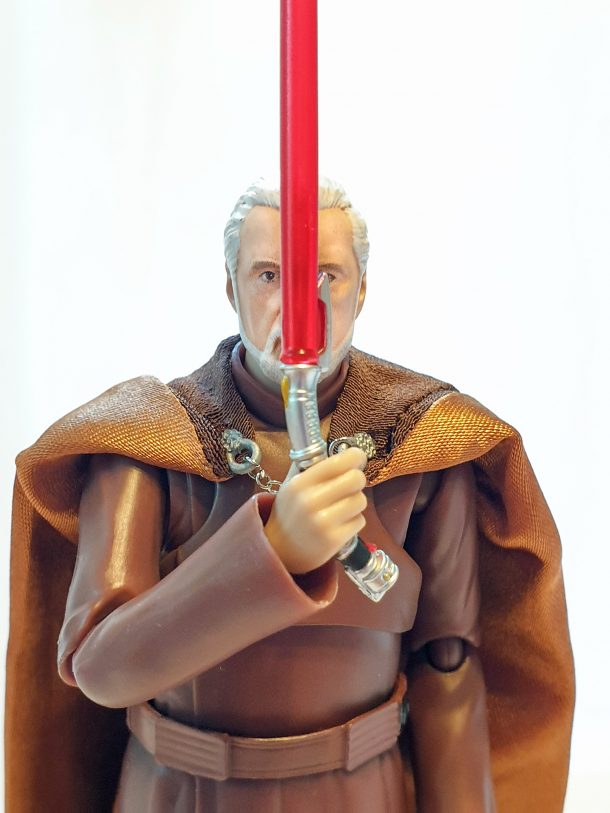 You can easily recreate Dooku’s lightsaber pose just before he duels Yoda. He has a firm grip on the saber. It won’t fall out easily. However, the blade does come off quite easily when you try to pose Dooku. So it may be best to first pose Dooku with his saber just the way you want and then to attach the blade. It will not fall off THAT easily, but when you touch the saber to pose it, to adjust the grip (lower, higher) the blade may come off more easily than you think. 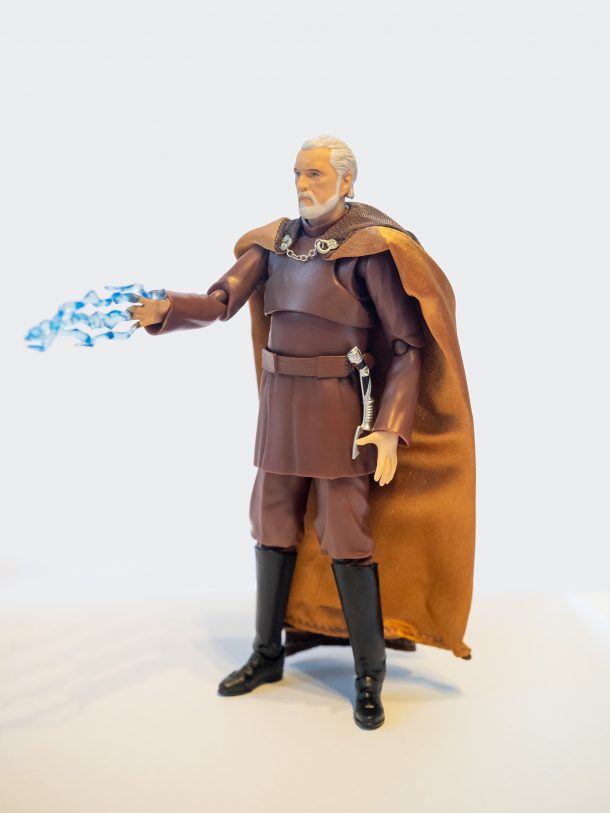 The Force lightning hands are cast in blue plastic which were painted in a flesh tone. They look nice and will come in handy when Dooku wants to roast that impudent Anakin a bit or show off his skills to Yoda.

Dooku also comes with an alternate headsculpt which is not that alternate really. 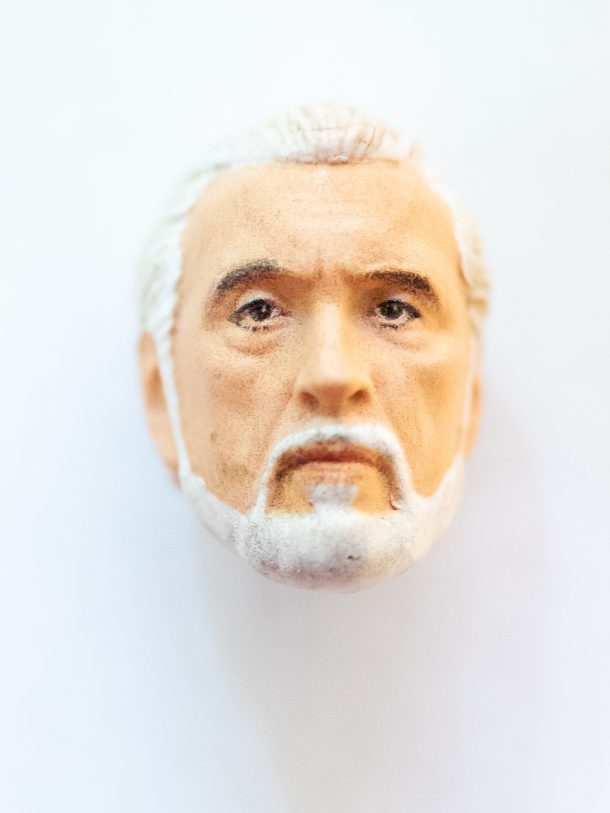 While the first headsculpt seems to portray Dooku with a somewhat bemused arrogance, this headsculpt here looks very, very similar. The only real difference is that the somewhat bemused faint smile is gone and and the right eyebrow is ever so slightly raised. I suppose this is Dooku’s “I can’t be bothered” face. I would have hoped for a face that is more different. Either Dooku’s outright evil smile when he taunts Anakin or Obi-Wan in the duels or Dooku’s look of terror when he realizes Palpatine tricked him and that Anakin will kill him would have worked better here, I think.

But the sculpt is very good, in my opinion. Remember, you’re seeing extreme close-ups here. In hand, on the desk/shelf this looks exactly like Christopher Lee as Dooku.

The somewhat fuzzy look gives SHF faces their natural texture when viewed with your own eyes and not through a macro lens. This is something Hasbro’s photo real is still missing, which is why their faces still tend to have a somewhat plasticky sheen. 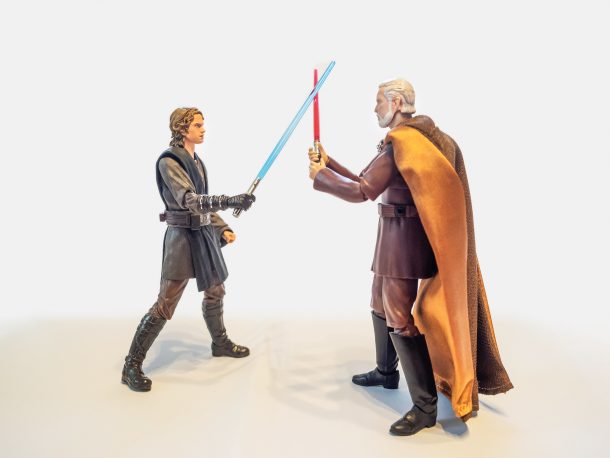 Dooku can easily hold the saber with two hands at an angle in more action orientied poses.

And finally, this is how Dooku looks with Episode III Obi-Wan and Anakin: 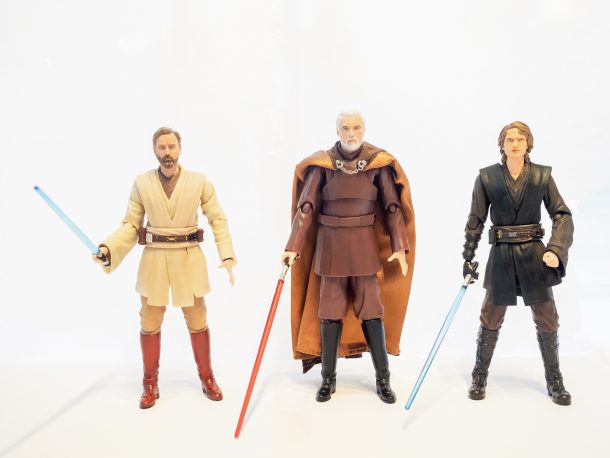 Dooku is the tallest of the three, as should be. Christopher Lee had an imposing height. And you can always give him some extra height even when you extend the legs.

So, what is my verdict?

I think Count Dooku is a nice figure to have, especially when you are a prequel fan. The figure itself is fun, you can certainly let Dooku have some fun with Obi-Wan and Anakin. But ultimately the figure is brought down by an inaccurate tunic color, an awkward cape that is simply too bulky and a very unsightly torso joint which distracts too much from the overall aesthetic.

Now, the good news is, that according to rumors Hasbro will make their version of Count Dooku soon(ish) (along with a Jar-Jar figure and yet another clone, Bly). So anyone who didn’t pre-order Dooku should most definitely NOT pay aftermarket prices for this figure. I would wait for Hasbro’s offering. Which doesn’t say Hasbro won’t give Dooku a bulky cloth cape as well, or, the horror, a plastic cape like Krennik’s which would absolutely not work here. But even if Hasbro’s Dooku turns out only as good as the SHF version, it’s will still be much cheaper.

In the end Count Dooku is one of the weaker SHF releases. Not bad, in my opinion, but not great either. I think mediocre is the right expression here. That being said Dooku does look really nice next to Obi-Wan and Annakin and the likeness to Christopher Lee is great. The biggest distraction, in my opinion, is not the inaccurate tunic color, but the unsightly torso joint. It really does look like a sports bra.