While we are still a few weeks away before Hasbro will release their numbers for the 4th quarter and full year there are already some early numbers and estimates that paint a rather grim picture for Hasbro, especially when it comes to action figures and here especially Star Wars. Click through for some very interesting numbers that may be reason for concern.

Website Seeking Alpha has released an article by toy industry expert Lutz Mueller on the situation of Hasbro in the 4th quarter of 2018. Mueller has various high profile contacts at national and international retailers, among them several national buyers for all the important US chains such as Walmart, Target etc and he can provide a pretty comprehensive picture of how things look at the retail level, since his contacts feed him numbers directly from the source.

But first things first: overall the toy industry is in good shape in the US in 2018 and sees growth. The effects of the TRU demise are behind us, however, it seems as if the demise of TRU had an interesting effect. Smaller toy companes, more nimble companies benefitted much more from it than the two giants Hasbro and Mattel, with retailers allocating more shelf space for these smaller companies and less for the two giants.

Which leads us to a very important metric: toy shelf space.

And here we have an interesting trend: compared to one year ago Walmart has LESS shelf space allocated for toys. Not more. Despite the absence of TRU in the 2018 holiday season and Walmart’s self-proclaimed claim to be the best toy retailer in the US. Target however has significantly increased shelf space for toys and overall, even without TRU, there’s more shelf space for toys in the USA in late 2018 than before the demise of TRU.
The data was compiled on November 25th 2018 and compares the situation with how things were on November 25th 2017, this was after the holiday reset, so numbers for shelf space are unlikely to change significantly for the rest of the year.

But now let’s look specifically at Hasbro and here Mueller provides numbers for Walmart and Target combined and things don’t look so good.

Hasbro has less shelf space for action figures at Walmart/Target than one year ago. Shelf space was reduced by 27%.
Mattel, on the other hand has almost the same shelf space as one year ago, thanks to Jurassic World it’s only 5% less for Mattel than in 2017. And a real winner is newcomer eOne with its PJ Masks line. Overall, shelf space for action figures at Walmart and Target combined has stagnated and what mostly Hasbro and to a much lesser degree Mattel lost was more or less given to eOne. 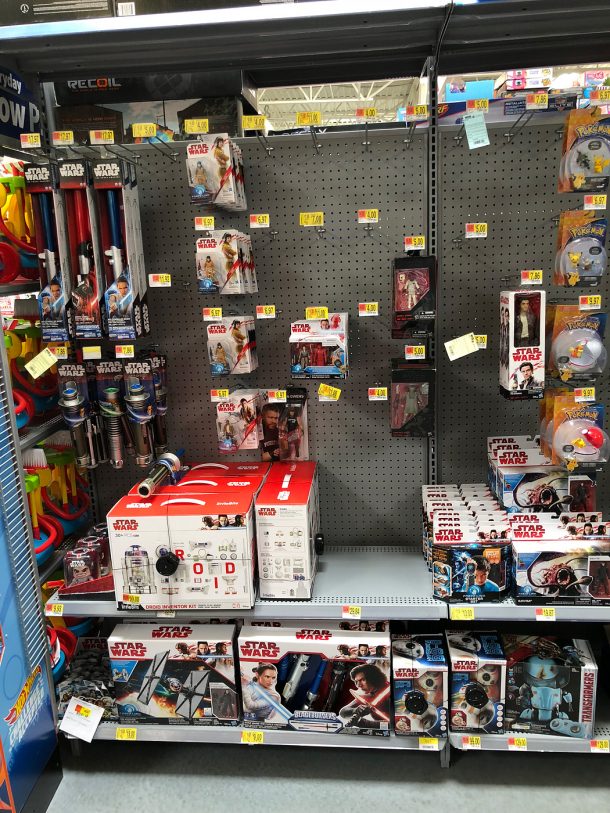 Overall, the situation is not great for Hasbro at the moment. This could of course also be an indication that many fans resort to buying online. Brick and mortar is only one part of the picture.
That being said, Hasbro has about 1/4 less shelf space for their action figures than one year ago. Sell through weight (this includes etailers, however!) is also declining for their action figures and since Hasbro told us repeatedly this year that Marvel is growing this can only mean one thing: Star Wars is having a difficult time at retail and retailers therefore reduce shelf space for Star Wars action figures that fail to sell.

The staggering number of Star Wars action figures and vehicles at stores such as Ollie’s or Ross may be one consequence of all this.

On top of that Hasbro is also losing shelf space for NERF and its fashion dolls, whereas MGA Entertainment with its Bratz Dolls is storming shelf space, they have a whopping 114% more shelf space allocated for their dolls than one year ago. And since shelf space is a finite resource that space must come from somehere… and as it seems it’s mostly shelf space that was taken away from Hasbro and, to a much lesser degree, Mattel.

So here we are now at the end of 2018. Star Wars has had a veritable box office flop with Solo, the toy line is struggling with decreasing sales and retailers giving less shelf space to Star Wars action figures.

In light of all this it may not be a complete surprise that we haven’t heard anything yet about an extension of the licensing agreement between Hasbro and Disney. My feeling is that Hasbro wants better terms. As things are now Star Wars toys, especially action figures, are on the decline.

But never forget, the toy market is volatile, and who knows, with Episode IX, The Mandalorian, the Cassian Andor series and The Clone Wars the ship may turn around again. Also, we may witness a shift to etailers, away from brick and mortar, for action figures aimed at an adult target demographic. Nevertheless, Disney and Lucasfilm have a very important job to do. They must heal the rift in the fandom that The Last Jedi tore open, they must win back the more casual and even the hardcore action figure collectors and they must do so with figures that not only look great but also with characters you want to have as action figures in the first place. And if not… I wouldn’t be completely surprised if in 2020 some other company than Hasbro will produce Star Wars toys. I sure don’t hope so, because I think Hasbro is doing a great job, mostly, given the material they have to work with and with how Disney keeps things secret from them. Also, any manufacturer change would be disruptive and most fans would probably be very unhappy.

One final thought: it was only to be expected that Star Wars toy sales would shrink after The Force Awakens. However, as things are, for a movie year Star Wars is doing incredibly bad in 2018, it’s maybe about on the level of how things were before the movies, perhaps still selling somewhat more than in 2014, but prices are higher too. Star Wars can do much better. And should do much better. Let’s hope for a much better 2019!

Previous Article: The Possible Future Of The Star Wars License