Let's Be Frank, Because Not Even Patrick Wants To Be Patrick At This Juncture In Time

Hasbro is doing everything to secure a successful campaign for the HasLab The Black Series 6-inch Rancor. But is the effort futile? With lackluster stretch goals and outrageous backer landmarks before you’re entitled to them, this HasLab is souring the customer base. It’s evident Hasbro is in damage-control and panic mode. (more….) 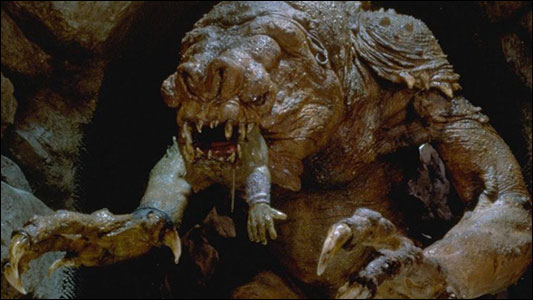 It seems as if Hasbro may become the Rancor’s next meal.

And they’ve been visiting our site – we wondered why we were getting so many clicks from Rhode Island. We digress.

There is a lot of speculation about what the Tier 3 and Tier 4 bonuses will be, but will this project ever come close to reaching those stretch goals (even if it successfully pre-sells 9000 units by the deadline)? Despite this, we can speculate all we want. Wouldn’t it be best to send a clear message to Hasbro to let them know SPECIFICALLY what it will take for you to back the Rancor?

I think HasLab has headed in the wrong direction… severely. The whole point of this consumer-backed platform was to produce that “ONE ITEM” that Hasbro could never bring to retail or any other way. They could have offered it as a Target or Amazon exclusive (with some pre-order clause) for about $200+, and all would be right in the universe. But if they made a large Snowspeeder for around $100 and change, it’s quite laughable that the Rancor cost is nearly three times more.

The Rancor is not the right choice for the HasLab program. Things like the Death Star, Chalmun’s Cantina, Tantive IV, and The Ninety Six are all wise choices. The 6-inch Rancor is not. It’s nonessential, overpriced by A LOT, should be delivered to the general marketplace, and the extras are beyond insulting.

It seems Hasbro is custom designed and the best fit for The Vintage Collection. It’s a massive success in the 3.75-inch scale universe. And evidenced by the measly 5000+ backers so far, it seems The Black Series 6-inch community feels similarly. And, of course, anything can change, and hopefully will, on a dime.

It will be fun to have all of your responses (about what it will take for you to back The Black Series Rancor) before the reveal on Friday. Let’s document your responses and see if your suggestions come close to what Hasbro already has planned.

Next Article: Kathleen Kennedy's Contract Apparently Extended For Another 3 Years