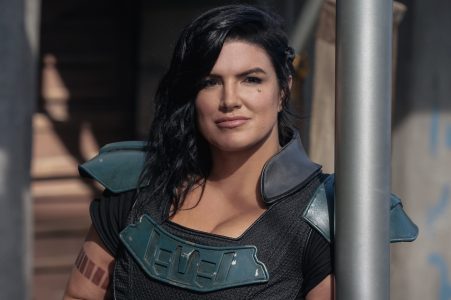 If you happen to follow certain blogs or follow certain actors on social media you may be aware that Gina Carano has been somewhat of a controversial character online. I will not go into further details here, you can easily find stories about that on Google. Anyway, Gina loved to ruffle quite a few people’s feathers and there has been an ongoing trend on social media platforms like Twitter where people called for her to be fired from The Mandalorian.

And then on Tuesday Gina Carano posted the following on Instagram, the post has been deleted of course, but as usual people make screenshots of everything, so here is Gina Carano’s Instagram post that got her fired from Lucasfilm and thus The Mandalorian.

In a nutshell, Gina compared being a conservative/Republican person to being a Jew in Germany in the 1930s/1940s. This Instagram post is just one of many social media posts by Carano that involve politics in some shape or form.

io9 was able to obtain an official comment from Lucasfilm:

“Gina Carano is not currently employed by Lucasfilm and there are no plans for her to be in the future. Nevertheless, her social media posts denigrating people based on their cultural and religious identities are abhorrent and unacceptable.”

And that’s it for Gina Carano and most likely Cara Dune. In theory Favreau could recast the role of Cara Dune, but in all likelihood the character will be written out of the show.

Now I want to add some commentary:

First, before anyone accuses Lucasfilm / Disney of having a bias – Carano’s firing had a precedent with Chuck Wendig, who used to write Star Wars Marvel Comics and novels for Lucasfilm. He was fired after some nasty (political) tweets that more or less called to violence against conservatives. So, Wendig is on the other side of the political spectrum.

Is it ok then for Lucasfilm to fire Carano (or Wendig) over a social media post? In my opinion, not really. However, I absolutely understand why Lucasfilm felt they needed to fire Carano after her Instagram post, it is a PR nightmare and it was also a colossally stupid post by Carano. Comparing modern day convervatives to Jews in Germany and painting them as victims is simply ridiculous and wrong on all levels.

But then again I am against cancel culture. People say and do stupid things all the time, I believe Lucasfilm should have reprimanded Carano and told her in no uncertain terms to stop posting political comments on social media while she is employed by Lucasfilm. And of course Lucasfilm should then demand this from ALL their freelancers, hired actors and employees, some of whom just love posting political stuff on social media. And only if Carano didn’t adhere to that rule should they have fired her. Of course we don’t know if Lucasfilm DID tell Carano to stop posting the things she does post before. Maybe they did.

But as things are Carano’s post gained immense momentum online, people were upset, as people usually are on social media, and the pressure was simply too much and Carano had created a lovely PR nightmare for Lucasfilm, that, given the current situation in Hollywood, really had no other solution.

Politics and entertainment, especially when it’s entertainment set in a fictional universe and not something based on real life events, should not mix – ever. It is sad that politics are infused into everything these days, movie reviews, award speeches, social media posts by actors and comments sections on fansites.

My recommendation to all actors / artists is, not that I am in the position to recommend anything of course, to simply stop posting political comments on social media. Focus on your job, your job is to entertain people, this is why people want to see or hear you, not because you think the rain forest needs rescuing, but because of who you portray on screen or on stage. Post work related stuff, fun behind the scenes pics or share experiences and fun stories. Why so many actors or other celebrities feel the need to post political commentary on social media is beyond me. Actors and entertainers should not mistake themselves for social activists. They are not.

In the end maybe Gina Carano should have watched Ricky Gervais’ 2020 Golden Globe speech a few more times. Maybe other actors will now think twice before they feel the need to share their political views on social media. But most likely not.

So that’s it for Gina then. Goodbye Cara Dune! Gina Carano’s management also dropped her following her Instagram post. So it remains to be seen if she will have a career going forward.
The question is now if this will have any negative repercussions for The Mandalorian, both on the PR front and behind the scenes. It is unknown how far season 3 post production has advanced, but chances are some scripts need to be changed now – unless they replace Carano with another actress, which I find unlikely. Gina Carano was also most likely meant to star in Rangers of the New Republic, the recently announced Disney+ show. How and if plans for that show will change now remains to be seen.

So, what do you think? Was it ok for Lucasfilm to fire Carano after a string of (more or less) controversial social media posts? Just as it was ok to fire Chuck Wendig over a similar matter a few years ago? Will you miss Gina and Cara Dune?

Read more on the Hollywood Reporter site and on Variety.

Friendly reminder: keep it polite and civil in the comments! The comments section will be heavily moderated if need be!

Previous Article: Has Walmart Figured Out The Solution For Their Exclusives?