It's Done! The Razor Crest Is The Most Successful HasLab Project!

The HasLab campaign for the Razor Crest ended five minutes ago and the final backer count is an astounding 28,257! That’s a new record and beats the Marvel Sentinel by more than 6,000 backers. The Razor Crest was off to a great start when it was fully funded after 26 hours. As expected things slowed down a lot after the first few days but it picked up steam again in the last week. Let’s celebrate an extremely successful Star Wars HasLab that exceeded everyone’s expectations! And let’s hope it sends all the right signals to Hasbro. Do you already have plans for your Razor Crest? How will you display it? And what is your wish for a potential third Star Wars Haslab in 2022 or so? 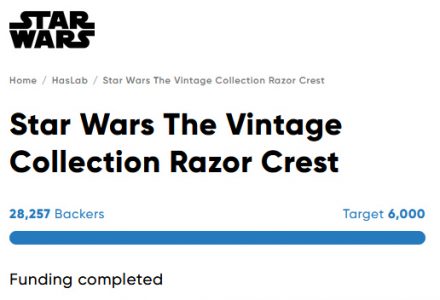