The HasLab Razor Crest Flight Stand Has Been Unlocked!

With 7 1/2 days still to go the Razor Crest has just reached more than 15,000 backers. Which means the flight stand has been successfully unlocked. There is zero reason to doubt that the Jawa will not be unlocked as well. The campaign will certainly add another couple thousand backers in the last week. The real question is if the Razor Crest will manage to get more backers than the Marvel Legends Sentinel. The Sentinel got 21,913 backers in total. Do you think Star Wars can beat Marvel? For that the Razor Crest would have to add another 7,000 backers in the last week. The bets are on! 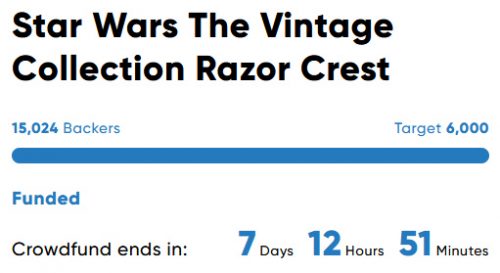 More than 15,000 have now backed the Razor Crest