A Very Quick Look At The Jedi Temple Challenge Show

The brand new show “Jedi Temple Challenge” had its first two episodes released a few days ago. The game show is intended for kids, with Ahmed Best returning to the Star Wars universe as Jedi Master Kelleran Beq, who oversees the challenges. So how is the show? Click through for a short discussion! 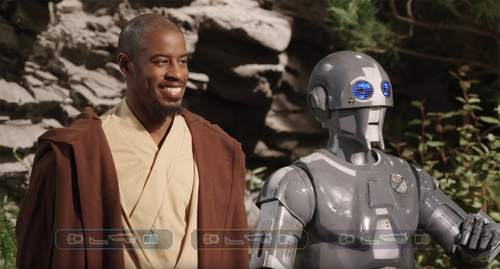 The premise of the show is simple: three teams of two kids each have to compete in various challenges. Their goal is to assemble a lightsaber. There are three rounds, one team is eliminated after each. On their way to the final piece, the kyber crystal, the single remaining team has to resist the lure of the Dark Side, which is voiced by Sam Witwer (the Dark Side is just a voice over). Also, failure is an option, the final team may not be able to get the kyber crystal.
Frank Oz also makes an appearance as Yoda’s voice, only heard offscreen, but it is still a nice touch. Lucasfilm invested quite some money here.

So, is the show any good?

Since this show is 100% aimed at kids an adult’s perspective can only provide so much insight. With that disclaimer out of the way here’s what I thought:

While production values are pretty good, the various set pieces look really nice and there are some nice CGI sequences, the show is only so-so at the moment. My main gripes are the following:

So in my opinion without kids and family in the audience who cheer for the teams everything is a little bit sterile here and there. Now I don’t know when the show was produced, i.e. before Corona or during the pandemic, so having an audience may be somewhat problematic at the moment, but it doesn’t look as if the show was ever meant to have a live audience in the studio.

Still, the idea of a Star Wars game show for kids is certainly a good one. But if this show gets a season 2 I believe Lucasfilm should expand the studio so they can have all the sets on the same stage, eliminating the need for jump cuts and transitions by using a CGI space ship (even if it looks nice), make it more like a game show, less “real”. I believe the lack of a live setting is detrimental here.

The first episode received 130,000 views on YouTube. Episode 2 has 40,000 views (the numbers will increase in the next few days). I don’t know what Lucasfilm’s expectations are, I hope for Ahmed Best that his new game show will generate enough clicks. But it may need a few tweaks to get there.

Did you check out the game show? Did you watch it with your kids? What did they say? Did they like it? Did you like it? Let me know in the comments!

You can watch episode 1 here and episode 2 here!