This year’s Star Wars-themed Columbia jacket(s) officially goes on sale this Friday starting at 12:01am EST. The last few year’s jackets have sold out FAST, so if you want one you’d better not wait! We had a chance to try out this year’s Dark Side edition a little early. Click through for an in-hand look! 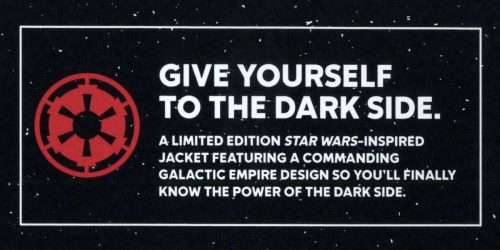 While not as flashy and iconic as last year’s The Empire Strikes Back Crew Jacket, this year’s Star Wars edition jacket actually comes in two flavors: Light Side and Dark Side. The minimalist design of this pull-over parka actually works great, with stark contrasts between the Light Side version and the Dark Side version. Columbia was nice enough to send us the Dark Side edition to play with and try out.

While not super thick and bulky, it’s still incredibly warm. With winter in Kentucky this year already hitting the teens a few times, I’ve had a chance to put it to the test! And, the striking contrast between the black color and the red Imperial patch and red highlights make this a jacket that can be worn on any every-day occasion. Check out some of our in-hand images below.

You can read the full press release right here!