Meet The Captain Of The Galactic Starcruiser Hotel!

Entertainment Weekly posted an article about Disney’s upcoming Star Wars Hotel on their website yesterday and for the first time you get to see the captain of the Galactic Starcruiser! Meet Captain Keevan, the one who will command the imaginary space ship in the Star Wars galaxy and keep you safe from the First Order! Click through for more. 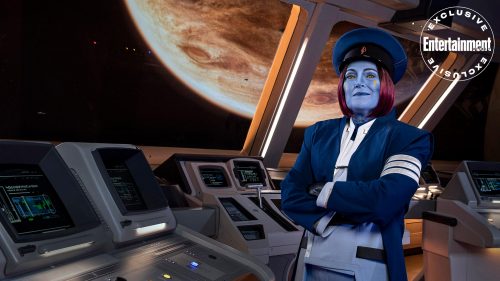 Captain Keevan. She has a hat. Source: Entertainment Weekly

Keevan could be a Pantoran, a famous representative of that species is Baron Papanoida portrayed by George Lucas in the prequel trilogy. But in my opinion this just looks really, really bad. Cosplayers look more convincing. And what’s with the hat? And the hair? And the overall design of the uniform? Doesn’t even remotely look and feel like Star Wars.

Also, are we to believe that Disney will only have one Captain Keevan actress and that the poor woman has to live in the Star Wars hotel 24/7, 365 days per year? Or will they rotate actors?

Maybe Disney should stop releasing marketing material for the hotel and seriously overthink their overall approach and design philosophy.

But what do you think? Would you like to meet Captain Keevan in Disney’s Galactic Starcruiser hotel? If you are lucky you can book a seat at the Captain’s table at dinnertime and maybe discuss the taxation of trade routes!

Next Article: The Vintage Collection: The Ninety Six - THE POWER OF THE FORCE Luke Skywalker (In Combat Poncho)