The Mission Fleet will have 2.5 inch scale figures, which means it’s yet another scale after the 5 inch Galaxy of Adventures figures that were introduced last year. What is confusing here is Hasbro’s statement from last year that kids enjoy playing with larger scale figures, thus the move from 3.75 inch to 5 inch. However, Mission Fleet has its focus also on the vehicles, which is why the figures are probably much smaller again. Also, the figures themselves are stylized and made to look more “cute”, with exaggerated proportions.

There will be three tiers of Mission Fleet sets, each having their own price point.

Tier 1 are the $8 “Micro Vehicles” or characters that come with a jet pack (they fly now!). 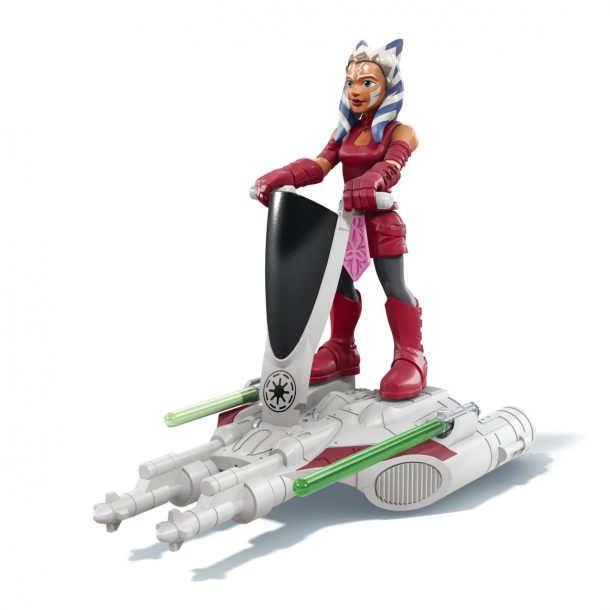 Other Tier 1 sets are Boba Fett, Chewbacca and a Clone Trooper.

Other Tier 2 sets are Captain Rex with a walker and a Clone Wars Obi-Wan with a speeder. Baby Yoda is removable from his crib. Each set comes with a minigun that shoots projectiles. These can be attached to the vehicle but can also be removed if you don’t like them.

Tier 3 are somewhat larger vehicles that retail for $20. 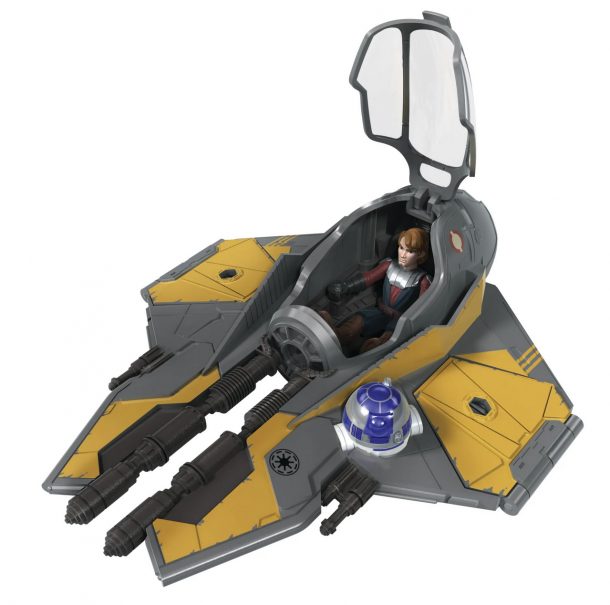 Other sets are Darth Vader’s Tie Interceptor and Luke’s X-Wing. Each of the sets also comes with a minigun on a stand that fires a plastic projectile. 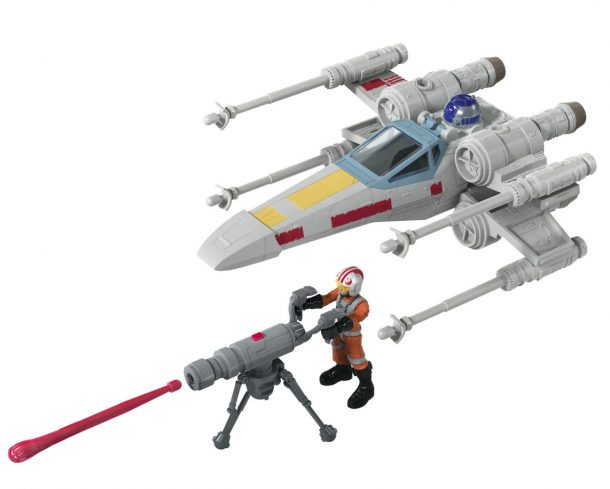 So this is Hasbro’s latest attempt to win over kids. The question is what the overall strategy is. Hasbro already offers the kid oriented 5 inch Galaxy of Adventures line, which also has some vehicles. And now Hasbro introduces a 2.5 inch scale line that also comes with vehicles. However, the new Mission Fleet gives you actual space ships with a cockpit that opens. But still, a child will not really be able to use 5 inch Galaxy of Adventure figures and 2.5 inch figures together, if scale and size are important. And even worse, if a kid already owns a few older 3.75 inch Force Link (or TVC) figures the two scales don’t mix too well, also the Mission Fleet is heavily stylized with a cutesy look, the old 3.75 inch figures and vehicles look more like the actual character and vehicle in the movie or show.

In other words, if a kid already owns a lot of Force Link toys the Mission Fleet is an all new ecosystem that does not play well with older Force Link figures.

Hasbro is probably trying to win all new fans here and they hope the Mission Fleet will be their introduction into the world of Star Wars.

Next question is how much playability there is. Say, a parent buys the Mandalorian with his speeder… whom is he supposed to fight? There is no other option from The Mandalorian available. He could fight a Clone Trooper of course, or maybe Captain Rex with his walker. Kids probably don’t care about continuity all that much, at least according to Hasbro.

It remains to be seen if that strategy will be successful. Do kids even care about Star Wars toys all that much anymore?

And what about adult collectors? Do you have any interest in these new Mission Fleet sets at all? Will you add them to your collection or ignore them? Or maybe pick up a few sets once you get them for $5 at Ollie’s or Ross?

Previous Article: Photo Of Black Series Baby Yoda In The Box Has Leaked