A Look Back At Star Wars Resistance

This weekend the final episode of Star Wars Resistance aired. I suppose not many readers have watched it, perhaps you may have even forgotten about the show in light of Baby Yoda taking over last year and with The Clone Wars soon to be in the spotlight. Anyway, let’s take a look back at Star Wars Resistance, the show that will most likely not leave a lasting impression with most fans. Click through for my discussion! 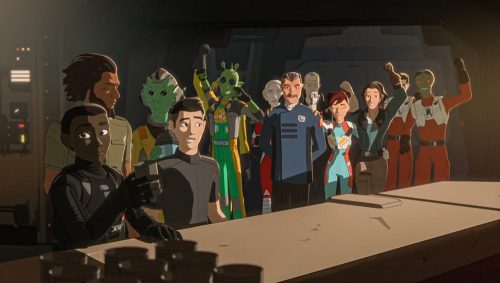 Before I talk about what made Star Wars Resistance so forgettable I want to praise the animation team first. The show was beautifully animated and looked pretty. The action scenes were very engaging, animation was smooth and fluid (with the help of CGI) and they never cut any costs to show as many details as possible on the screen. Lucasfilm Animation has very talented people and if all that Resistance did achieve was to give them a job before the next project begins, that’s not too bad.

But Star Wars Resistance as a show was, unfortunately, utterly forgettable. All of this can be blamed on the lackluster and boring scripts.

The show was off to a bad start with season one when the promotional material made it look as if Star Wars Resistance was all about star ship racing. All the various teams were introduced and if you watched the trailers and other promos you would have thought that Resistance is high octance action entertainment focused on racers.

All of that was wrong, of course, because the show was hardly about racing, and focused exclusively on an undercover spy mission by the protagonist, Kaz.

Season 1 had lots of filler episodes in the first half. The second half improved a bit, with the First Order arriving on the Colossus and threatening to take over. Eventually the First Order was chased off and the Colossus turned out to be a spaceship, it escaped into hyperspace. But at a cost, crewmember Tam, a mechanic on team “Fireball” defected to the First Order for the most stupid reason you can imagine. She was angry no one had told her Kaz was a Resistance spy.

And then came season 2. Anyone who thought season 2 would raise the stakes would soon be utterly disappointed. Season 2 had even MORE filler episodes than season 1. And where season 1 had the added benefit of the occasional episode with Poe Dameron, season 2 had none of that. Season 2 begins right about the same time as The Last Jedi begins. And if you thought season 2 would somehow shed light on the events taking place between The Last Jedi and The Rise of Skywalker was once again disappointed. You learn nothing about what the Resistance really does (other than trying to recruit people), nor do you really learn what the First Order is doing in the galaxy. The Colossus is hunted by what is basically just one lone Star Destroyer.

Kylo Ren? Has two very short hologram cameos in the last episode. Other than threatening his subordinates he does nothing. Hux? Had two cameos throughout the season or so.

If you thought that Phasma’s death in The Last Jedi would somehow have repercussions in Resistance you were disappointed again. It’s never brought up and never a topic.

In the end the Colossus crew manages to destroy the Star Destroyer that has been chasing them. And that’s it. Neither does Resistance lead up to The Rise of Skywalker, nor do we know more about either the Resistance or the First Order.

The show had almost no character arcs. Only Kaz and Tam have arcs, so to speak. Kaz’s arc is to become less clumsy. That’s basically it. And Tam’s arc is idiotic. First she betrays her friends and makeshift family by defecting to the First Order for the most silly reason imaginable… and then she decides to run away from the First Order again when she sees how the Star Destroyer she’s on is decimating the population on a planet that helped out the Resistance a few episodes earlier. While this is a compelling reason to leave the First Order the entire time the show glossed over the basic fact that Tam joined the First Order when it had just obliterated several planets in the Hosnian system, killing billions of innocent people.
This was never brought up. Not a single time. So we either have to believe Tam doesn’t know about the destruction, which is extremely unlikely or she never cared about the colossal war crime the First Order committed. None of it makes any sense if the death of a couple hundred or so natives on a planet upsets her so much. In other words: the plot wanted Tam to defect, the story team couldn’t come up with a good reason for that and then completely glossed over the ramifications of the destruction of Hosnian prime. It would have been interesting to see how Tam would react if she learned the actual truth about the First Order. They never showed us that, probably for the simple reason that no sane person with a shred of decency and morals would stay with the First Order unless being brainwashed, and the show made a point that Tam was never conditioned.

But the greatest shortcoming of Resistance is that it never added anything to the overall mythos or lore. In the end we had a Star Wars show devoid of almost all elements that people usually think of when they hear “Star Wars”. And where The Clone Wars or Rebels not only added to the lore and mythos and filled in gaps that made you appreciate the prequels or original trilogy a bit more, Resistance did nothing similar for the sequels. If you watched the show or not – you would still know the same about the conflict between the First Order and the Resistance.

Whether or not only two seasons were ever planned, as Lucasfilm claims, I don’t know. Season 2 doesn’t feel like a proper ending. Sure, the antagonists who chased the Colossus are all dead now, but we never learn what becomes of the Colossus, whether it finds a new home and if and how it played any role at all in the final conflict against the First/Final Order.

I think Lucasfilm approached the whole thing wrong and they certainly had all the wrong priorities. Nothing illustrates that better than a recent ABC News (owned by Disney) interview with Kaz voice actor Christopher Sean, in which he was asked what he is most proud of about the show:

“The diversity, hands down. We have the first Asian American lead of a Star Wars franchise. We have black female pilots, we have Latina pilots. People come up to me dressed as Kaz, saying, ‘I’m so happy I can finally dress as a character who looks like me, a character who has depth and layers, just like me.’ That, for me, is everything.”

While I can understand his sentiment somewhat this also shows how wrong things are at Lucasfilm if THAT is what the people involved prioritize or are most proud of. Sure, the show gives you characters with all different kinds of skin tones, contrary to, say, Japanese anime, where all characters usually more or less look one way with more or less the same skin tone. But anyone who ever watched anime like “Death Note” or something like “Steins;Gate” will probably agree that what you should be proud of, first and foremost, is a great story, a story that moves you, that engages you, that wrecks you and then builds you up again.
When in “Steins;Gate” the protagonist is at the end of his tether because he keeps failing to save his dear friend or is the accidental cause of death of the person he loves the most it’s something you don’t forget, it moves you. And you don’t care that all the Japanese characters have one art style and more or less the same shade of skin.

So maybe next time Lucasfilm announces an animated show (or any show) they should focus on story first. Because while the voice actor may be proud he’s the first Asian American lead in Star Wars his character is utterly forgettable and badly written. I’d rather think about Okabe Rintaro or Kurisu Makise from an almost 10 year-old anime than about any character in Star Wars Resistance.

And that is, ultimately, the greatest failure of Lucasfilm: they made something utterly forgettable.

And that is why quality entertainment like “Steins;Gate” has an 8.8 on IMDB from users (Death Note has a “9” even) and Resistance a shockingly low 4.8. With almost non existing tv ratings, because hardly anyone wanted to see it. This is what you get when skin shades are more important to you than proper story. If you prioritize story first people will care about the character and identify with him or her, no matter what shade the skin is. It seems Lucasfilm wanted people to care about the characters just because of the skin color and diversity, and completely forgot about having a good plot first.

Let’s hope the next animated Star Wars show after The Clone Wars will be a lot better. And Lucasfilm should get their priorities straight. Write a good story first.