Hasbro Financial Results For The 1st Quarter Of 2019

Hasbro released their numbers for the 1st quarter of 2019 and overall the quarter was alright for the company. Hasbro reported revenues of $732.5 million and net earnings of $26.7 million. But what about Star Wars? Click through for more info!

To cut to the chase: Star Wars was not mentioned once in the official report. Which is usually bad news.

But let’s look at the numbers!

First up, Hasbro’s 1st quarter revenue and net earnings since 2014: 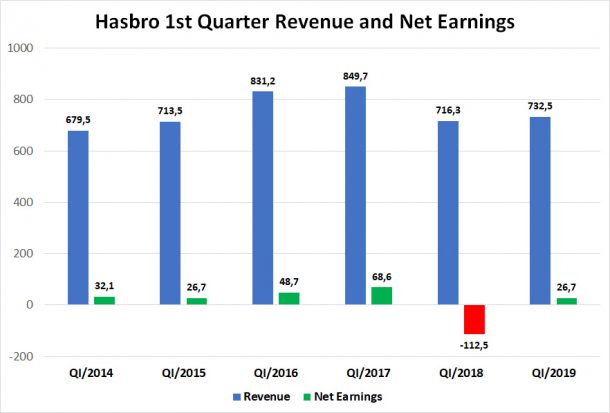 Q1 Revenue and Net Earnings in Millions of USD

As you can see Hasbro made somewhat of a comeback after a terrible 1st Quarter 2018 in which Hasbro felt the full brunt of the Toys R Us bankruptcy. Net earnings are still rather small, compared to previous quarters, but overall things are looking better again.

Let’s look at the performance of some of the segments: 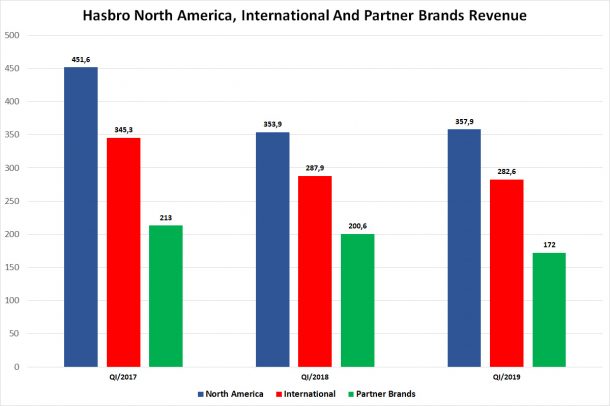 Partner brands are down again…

Hasbro reports that absent FX (foreign exchange), revenue for the international segment increased by 6%. North America revenue is up 1%. Revenue for Europe was down 1%, however, absent FX revenue was up by 8%.

But let’s look at Partner Brands growth quarter on quarter: 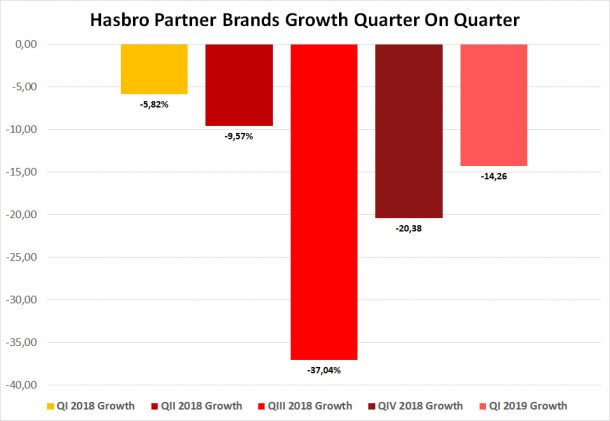 Without Hasbro giving us more detailed numbers it is impossible to say how well or badly Star Wars performed in Q1 2019. But absent any new movies in December 2018 chances are Star Wars didn’t do too well.

However, Star Was was mentioned in the conference call. And here Brian Goldner said that Hasbro booked very strong pre-orders for the Black Series Emperor Palpatine set and the new X-Wing helmet at SWCC. And Goldner once more stated that Hasbro will support Star Wars extensively later this year on Triple Force Friday. Nothing was said about any possible license renewal. We’ll have to wait for any info a bit longer, it seems. The license will expire in late 2020.

Also mentioned in the conference call is the fact that Hasbro is the number 1 toy and game brand on Amazon US and Canada.
And what may be somewhat cause for concern is that absent TRU point of sales were down by 10% for Q1 2019. But this is still within expectations, according to Hasbro. This probably illustrates the ongoing trend of toy sales shifting to online.

So without any numbers for Star Wars, all we can do is speculate. Maybe numbers from other sources such as the NPD group will shed more light on that. Also, Disney will release their earnings report in about two weeks from now, maybe their numbers will give us more insight.
Chances are high that the Partner Brands will perform much stronger following the release of Avengers Endgame and The Rise of Skywalker. But without any new releases in Q4 2018 and Q1 2019 (Captain Marvel was released very late in the quarter) it was only to be expected that Partner Brands will be down once more.