For those of you out there interested, ThinkGeek stores are now taking pre-orders for the Rey (Island Journey) wave of The Black Series [Phase III] figures. Special thanks to JTA reader Chewza for the news! 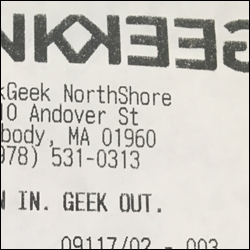 Went into one of my local Think Geek Stores today to poke around. Figured I’d ask if you could pre-order the upcoming wave at all. (I only asked about Rey, DJ and Rex.) Sure enough they had them in the system.

It doesn’t seem to say in the receipt but they told me they were due in their warehouse 1/20 and that they’d have them in store shortly thereafter.