In 1984, a new packaging design of Star Wars packaging was introduced for the European market. A cost containment initiative, the new packaging sported three languages of the Return Of The Jedi logo for a “one size fits all” approach. Although a “three-logo” design was created for The Power Of The Force line (as evidenced on some ‘boxed’ toys), it wasn’t carried over to the basic figure line’s card design. They continued to use the three Return Of The Jedi logos instead. Although the word “Trilogo” is found nowhere on the packaging, the term is universally adopted by all Star Wars collectors to describe this line of figures.

Today we revisit Chewbacca. Chewbacca’s Trilogo card art features an alternate “portrait style” image of the character with a background of Endor. It was also used for the running change American Return Of The Jedi figure. The review’s Collector Notes are updated with this information. See the full card art and additional notes by revisiting 1978’s STAR WARS Chewbacca figure HERE.

In early April we reviewed the Revenge Of The Sith Chewbacca 12″ KB Toys exclusive. If you recall, I didn’t have the weapon available to shoot with the figure. Well, I found it and added eight new images with Chewbacca with the gun. For those of you who are interested, here you go! 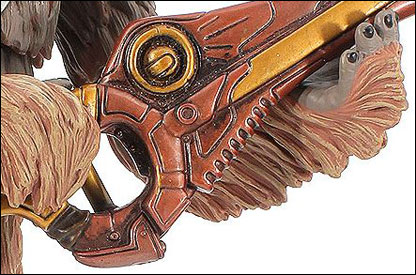 Let’s continue with the Collector Series Chewbacca figure. It’s the worst 12-Inch Figure Hasbro ever produced. See the figure in our Research Droids Reviews today! Be sure to leave your thoughts in our comments section, vote in the poll or comment about it on our Facebook page. Click the banner below for the direct link to the review! As always, you can also send your review requests via email if you’d like to see something that we didn’t cover yet.