Today we revisit (Twin Pod) Cloud Car Pilot. It didn’t come in standard Trilogo packaging. Instead, it was packaged in what the collecting community deems as “Trilogo Hybrid” packaging. The card front is nearly identical to the Kenner Return Of The Jedi Cloud Car Pilot figure, while the back features the Trilogo logo and figure group shot. The review’s Collector Notes are updated with this information. See the full card art and additional notes by revisiting 1982’s THE EMPIRE STRIKES BACK (Twin Pod) Cloud Car Pilot figure HERE. 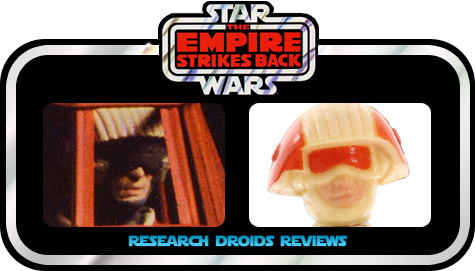 Our “Pilots, Commanders And Droids! Oh My!” marathon continues with the (Twin Pod) Cloud Car Pilot figure. It’s one of the Kenner’s finest accomplishments. Oh, and we still don’t have an accurate modern counterpart. Relive your memories of this classic 1982 action figure in our Research Droids Reviews today. Be sure to add your own experiences to the conversation! Reminisce your own childhood stories of this figure in our comments. Share your life-changing vintage Kenner adolescent experiences with us!