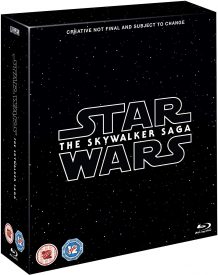 Welcome To The World Of 4K Star Wars!

That’s right! After all the rumors of 4k versions of the entire saga coming for quite some time now, Disney+ shows up and says “SURPRISE!” The entire Star Wars saga (minus Solo and The Last Jedi which are licensed out currently) are available in 4k and also apparently with Dolby Atmos. I know where I’ll be for the next 24 hours, how about you? Now, we can only hold out hope that when they come to Blu-Ray we get our fabled theatrical releases as well. You can sign up for a free trial and see the first two episodes of The Mandalorian if you are still on the fence.

You can sign up for a free trial of Disney+ right here!

P.S. Despite being scheduled for a 9 am EST release, The Mandalorian is live and we’ll have reviews coming!