Robot Kingdom has temporarily taken down the listing to the exclusive Han Solo (Hoth Outfit) and Princess Leia (Hoth Outfit) set (there will be a new availability date supposedly). While they confirm that any previous orders placed are secured, they are leaving it off of their site until it can be put back up for pre-order. Special thanks to JTA reader and friend CSE for the alert!

Wow! Robot Kingdom did some warehouse cleaning and found some 2010-era Legacy Collection Comic Packs in stock. These included some of the finest figures Hasbro has ever brought collectors. It’s amazing to me how much many of these fantastic Comic Packs sets go for today on eBay. When the starting asking price exceeds $500 on some, you know that Hasbro created gold back in the day. Ah, the good ‘ole days. 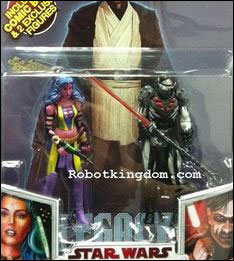 If you want to get them before retail, Robot Kingdom is accepting pre-orders for many of the retailer exclusives coming this Fall in The Black Series [Phase III] 6″ line. Some are sold out now, but many others are still available. They’re also taking pre-orders for Jaina Solo which supposedly ships October 1st (and is part of the third wave of post-Force Friday II TBS6 case assortments. Click through for more.