The Mandalorian Merchandise - Has Disney Dropped The Ball?

Now that the Mandalorian has aired its first episode fans are already talking about what action figures they want. Action figures we will probably either never get or only get months and months later. But let’s not talk about action figures, let’s talk about something that took most fans by surprise and what most fans apparently find most adorable. And to protect those who had no chance to see the show yet, you have to click through to know what I am talking about! 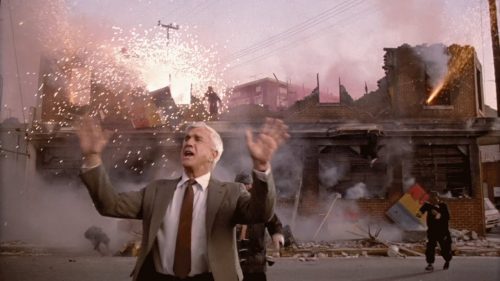 Nothing To See Here, Absolutely Nothing! Move along, move along!

END_OF_DOCUMENT_TOKEN_TO_BE_REPLACED

The LA Times posted their full walkthrough of Savi’s lightsaber workshop on YouTube, in the embedded video you will see what it’s like to build your saber, from beginning to end, including the full experience and performance in the workshop! The only thing the video doesn’t show is that on Batuu nobody refers to Savi’s workshop as a lightsaber workshop, so if you ask for directions and want to know where you can build your own lightsaber you will instead be referred to Savi’s scrap business, which serves as a front so the First Order doesn’t get wind of it. The saber will cost $200 plus tax. After the jump there are some more videos providing a good look at the other highlights from the park, such as the Droid Depot!

END_OF_DOCUMENT_TOKEN_TO_BE_REPLACED

Every now and then I come across some really weird, odd or interesting Star Wars merchandise in my excursions to what our grandparents used to know as “retailers”, these places are kind of like Amazon, only you have to push a real shopping cart around or carry some actual bag or basket with your own hands and you have to put stuff in all by yourself and actually walk around using your own feet. Quaint, I know, anyway, this is not about retailers, this is about random Star Wars merchandise. And I found this Rey USB stick at a department store very recently. And I wondered: who wants a Star Wars USB stick? And who thought it’s a great idea to make Star Wars USB sticks? When I googled the company I found out they have a whole collection of them. There are close to 30 Star Wars USB sticks, covering all eras, there is Han and Chewie, Yoda, there are Clones, Admiral Ackbar even, but not Luke or Leia, however Poe, Kylo and C-3PO. Actually, they look kind of cutesy, well designed really, and might almost be collectibles all by themselves. But at 20 euros (or a little more than $20 on Amazon US) for each stick this is one very expensive collectible. Have you found any interesting, weird or funny Star Wars merchandise recently? Share it in the comments! 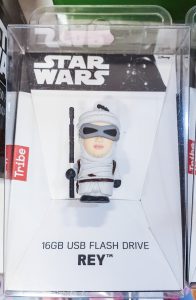 Since Rey is a trademark, do you have to pay a license fee to Disney when you name your daughter Rey?

It was announced a while ago that visitors of Disney’s all new Galaxy’s Edge Star Wars attraction would be able to buy “in-universe” merchandise. Now an article on attractionsmagazine.com gives us a first look at this merchandise. You’ll be able to buy clothing (Jedi robes, as well as First Order and Resistance outfits), custom made lightsabers, Holocrons, Jedi and Sith artifacts, plush creatures or “artisan style” plush toys of various famous Star Wars characters plus a few other things such as musical instruments. Of special interest to JTA readers will probably be that you can also buy your own custom made BB or R-unit droid (which sounds like Disney’s build-a-droid). What seems to be missing, at least it was not mentioned or shown in the article, are Imperial outfits or more old-fashioned Rebels outfits. While the various toys and artifacts seem to span all movies and eras, most of the clothing you can buy (other than the Jedi robes) appears to be focused on the new entertainment. Check out more photos of the merchandise over on attractionsmagazine.com!

UPDATE: Please check out the new Galaxy’s Edge article on io9 for all the details you will ever need to know! Basically all the questions you still have will be answered! Including what the droids you can build will be: they will be fully radio controlled, so probably at least the size of a Sphero. And the droid, when you control it through Batuu, will even interact with various things you will encounter along the way. A Disney spokesperson also explains why Batuu (and not some established planet) was chosen and how Galaxy’s Edge can change with any new movies and shows. 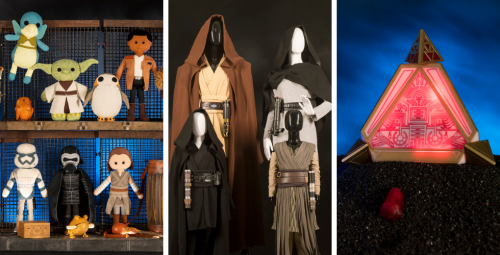 Some of the merchandise you can buy at Galaxy’s Edge