Hasbro announced earlier today that their Star Wars team will have some changes. Product Design Manager Sam Smith, who we last saw at toy fair, will no longer be on the team, he will stay with Hasbro and work on other action brands. Instead Chris Reiff will join the team as an Associate Principal Designer. Reiff has experience working  as an illustrator for various Star Wars books and products. Vickie Stratford will remain the design lead.

However, the big news is that Mark Boudreaux will retire. He’s been with Star Wars since the inception of the toyline when he joined Kenner in early 1977. Mark had a hand in designing every Kenner/Hasbro Millennium Falcon toy over the past decades. Fans will certainly sorely miss him. But all good things come to an end and Mark will hopefully enjoy his well deserved retirement after working on Star Wars toys for 43 years.

Thanks to Cybereye for the alert! 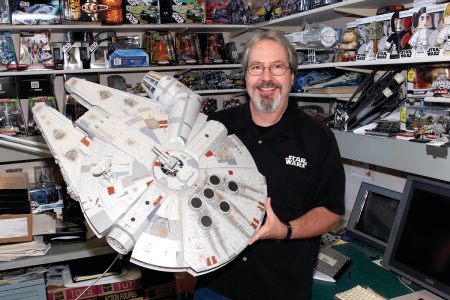 Mark Boudreaux with the BMF

It may be the Ides of March, but Hasbro remains happy and positive about Jabba’s Sail Barge and sends us exclusive information on the item’s shipping box. Since Jabba’s Sail Barge is now more than halfway to reaching its goal, Hasbro would love to say thank you for the amazing support behind this HasLab initiative by moving forward with the reveal of another exciting tidbit! Please see the attached exclusive image of Hasbro’s own Mark Boudreaux holding the Barge’s white box mock-up for scale. You’ve been curious to see how this will come packaged, now the official box size has been revealed. 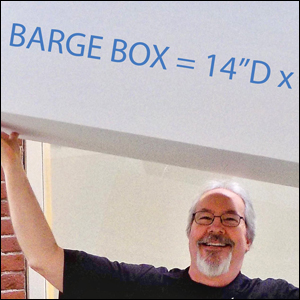