Everything You Need To Know About The Vintage Collection TIE Fighter Pilot (VC65) Re-release! But It's NOT A Re-release!

Well, here is something a little shocking. Did you know that The Vintage Collection TIE Fighter Pilot (VC65) REISSUE is really a new character in the lineup, and shouldn’t be counted as a reissue of the original VC65 figure from 2011? For unknown reasons, Hasbro repacked Lieutenant Oxixo as the 2021 TVC TIE Fighter Pilot reissue instead of the figure with the solid black helmet. Will there be a running change? Because this is incorrect. Lieutenant Oxixo needs a new VC number and new card art – it’s a new character for the line. If Rebel Fleet Trooper gets both a VC52 and a VC183 number and it’s the same figure, then a generic TIE Fighter Pilot and Lieutenant Oxixio need two unique numbers between them! The figure received a couple of other enhancements aside from the obvious. The Photo Real on this figure is not bad. But there are other things. We took the time to break it all down for you by producing an all-new 76-image gallery complete with both versions (2011 and 2021) featured, comparison shots, and a breakdown of what separates the two releases in the Collector Notes. Check out this confusing re-release in our RDRs now! There’s more difference here than you may realize.

But That Isn't Lt. Oxixo From The Vintage Collection

The infamous tunghori listed “Lieutenant Oxixo” on his eBay store, claiming it’s the one from The Vintage Collection Imperial TIE Fighter vehicle. (Our review for that vehicle is RIGHT HERE.) However, if you look at the images, this figure has a removable helmet (something Hasbro changed with the TVC release). I am not sure if he listed old images, or if this is really the TVC figure for sale, but I found it interesting. My figure has a black head with a black chin. It’s hard to see the rest because the head is glued inside of the helmet. 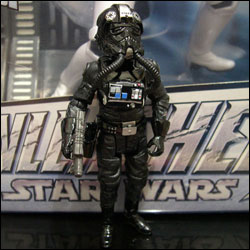