1985 THE POWER OF THE FORCE Imperial Gunner: Trilogo Update

We are finishing the Trilogo line up with the final 15 The Power Of The Force Kenner figures, and there weren’t any coins provided with them. Today we revisit Imperial Gunner. The card art features darker color tones with a pink wash over the entire graphic. Kenner “airbrushed” an image of a new helmet over existing image. See the full card art and additional notes by revisiting 1985’s THE POWER OF THE FORCE Imperial Gunner figure HERE.

Let’s check out the FAO Schwarz exclusive Grand Moff Tarkin & Imperial Gunner (With Interrogator Droid) Collector Series 12 Inch Figure two-pack set. It’s very nice. See more in our Research Droids Reviews today! Be sure to leave your thoughts in our comments section, vote in the poll or comment about it on our Facebook page. Click the banner below for the direct link to the review! As always, you can also send your review requests via email if you’d like to see something that we didn’t cover yet.

Tonight we are adding one of the latest releases from The Vintage Collection to our Visual Guides. Click below to check out the Death Star Gunner (VC147). Make sure to also check out our full review on this figure right here. 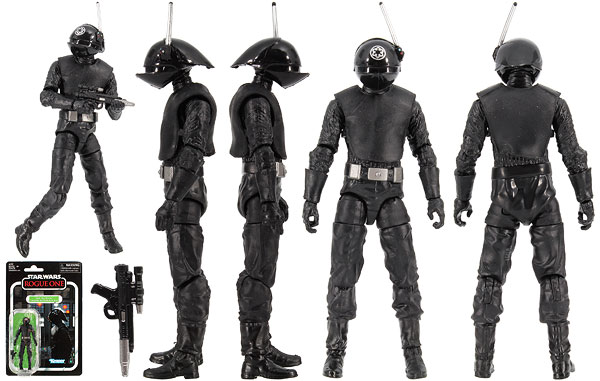 The latest wave of The Vintage Collection has hit, so it’s time to start looking at them! Let’s begin with the Death Star Gunner. We’re disappointed with it. But it is the most-definitive version we have now. Learn more in our Research Droids Reviews today! Be sure to leave your thoughts in our comments section, vote in the poll or comment about it on our Facebook page. Click the banner below for the direct link to the review! As always, you can also send your review requests via email if you’d like to see something that we didn’t cover yet.

DON’T FORGET TO CLICK THE COIN! We continue with our uninterrupted run of the final wave of vintage Kenner figures which we’re calling “The Final Countdown.” These 15 action figures make up Kenner’s THE POWER OF THE FORCE series 8 figures. Here’s another beauty of a figure that still looks great today! But there is still debate on the Imperial Gunner. Find out why in our Research Droids Reviews today. Be sure to add your own experiences to the conversation! Reminisce your own childhood stories of this figure in our comments. Share your life-changing vintage Kenner adolescent experiences with us!