Forces Of Destiny On Demand

You can now watch the Forces of Destiny episodes On Demand on Disney Channel and on the Disney app. So far, only the first two episodes (Sands of Jakku and BB-8 Bandits) are currently available, but the rest are to be added later on. I’ll admit, it was a bit better watching them in HD on a larger screen without needing to stream or plug anything. The next new episode is due out today on Disney’s YouTube channel.

Star Wars Forces of Destiny,” an original series of animated shorts which explore the untold stories that helped shape the destinies of Rey, Jyn Erso, Princess Leia, Sabine Wren, Padmé Amidala, Ahsoka Tano and others, will make its debut beginning on July 3rd on YouTube.com/Disney. A new short will premiere online each day at 10am PST, culminating with their broadcast debut on Disney Channel, Sunday, July 9th.  “Star Wars Forces of Destiny” will also be supported by global product extensions such as books, apparel, bedding, as well as Hasbro adventure figures & role play items available beginning August 1st. 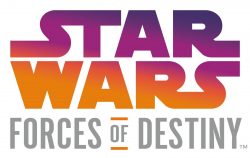