Did Disney Cancel The Clone Wars Because It Was Getting Too Graphic?

Comicbook.com recently released an article in which Clone Wars Boba Fett voice actor Daniel Logan is quoted as saying that Disney canceled The Clone Wars back in 2013 because the show would have become too graphic for them.
Logan said this at London Comic Con: “Disney, they cancelled it, I think it was getting a little too graphic — actually, it was getting really graphic. Boba was doing some really, really cool stuff. He started actually becoming a bounty hunter.”
According to Logan he recorded dialogue for several episodes which would have pitted Boba Fett against Cad Bane and would have seen him become the bounty hunter we know.
But instead of finishing The Clone Wars Disney created Rebels, a more family friendly show. We can only hope that we will get all the missing episodes one day, graphic or not, I think Disney should not insist that all of Star Wars must be family friendly, Resistance is good family entertainment, The Clone Wars can be more mature. Let’s all hope the show will be a huge success on the streaming service and convince Disney to finish all the episodes that have recorded dialogue!

Some less than savoury types

Boba Fett Backs The Barge And So Should You! 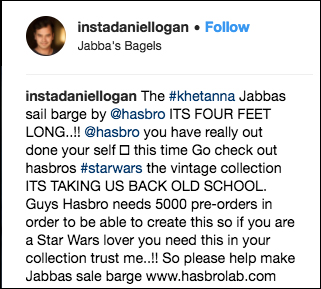