The next two cards from the weekly Topps Star Wars Living Set are now out. Featuring the iconic blue starfield and the impressive artwork of Kris Penix, check out General Rieekan (#209) and Boussh (#210). Each Tuesday, two new cards will be released and be only available for one week. Click here to view the entire Star Wars Living archive, including individual print runs. 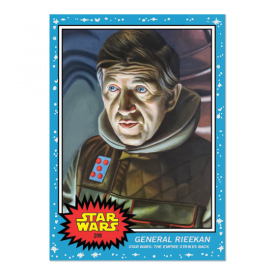 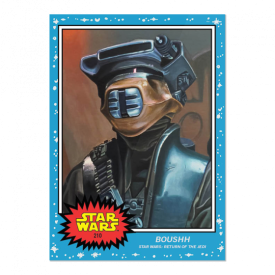 Today we revisit Princess Leia Organa (Boushh Disguise). For the Trilogo art, the color has been darkened a bit. Also, they changed the character’s name to Boushh. Other than that, not much changed from the 1983 ROTJ Kenner card art to the Trilogo card art. See the full card art and additional notes by revisiting 1983’s RETURN OF THE JEDI Princess Leia Organa (Boushh Disguise) figure HERE.