Which The Black Series Figures Need A Re-release In The Archive Line?

The Black Series has come a long way. At first hated by many TVC collectors (and still only begrudgingly accepted by some more than 6 six years later), welcome by many others, the line, despite being successful, soon became the target of ridicule because of the extremely lackluster paint apps. That was further exarcebated when S.H. Figuarts showed collectors what is actually possible, with faces that look stunningly real. But since then Hasbro has come a long way and ever since photoreal was introduced in early 2018 the figures finally look like humans and no longer like caricatures. However, that leaves collectors with quite a few not so good looking figures. With Hasbro’s Archive line collectors and newcomers now have a chance to buy updated versions. But what figures should Hasbro release in the line? Which characters need an update the most? Jedi Luke? Poe Dameron? Or maybe Hasbro should release an updated version of Jyn, so she no longer looks like Princess Jasmine? Which figures would you like to see in the Archive line, updated with photoreal? And bonus question: will photoreal cut it or is a a new headsculpt needed as well sometimes? Leave your suggestions and thoughts in the comments!

First Look At X-Wing Luke From The Archive Line

JTA regular Matthew Cohen provided us with a photo of the brand new X-Wing Luke in the Archive line. As it turns out, the production figure looks different and better than some of the promo photos in which Luke had quite red lips. The actual figure looks a lot more lifelike. But see for yourself!
Will you get X-Wing Luke? I do think the original release is still pretty good and X-Wing Luke is the one figure that needed an update the least. Now Bespin or Jedi Luke on the other hand… 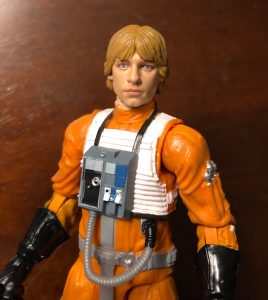