Adam Savage’s “Tested” YouTube Channel recently posted a video of him assembling a commercially available Thermal Detonator kit (currently sold out, you can be put on a waiting list). While we here on JTA focus on toys and action figures there are also many fans who collect prop replicas, from lightsaber handles and blasters to things like thermal detonators.
Adam Savage usually builds things from scratch, but this time he uses a thermal detonator kit designed by KR Sabers and One Replicas. It comes with electronics and looks pretty much like the “real” thing used in the movie. Click the image below to watch the video! It’s somewhat long, 20 minutes or so, but what better way is there to pass the time, when many of us need to stay at home anyway. And if you watch the video all the way through to the end Adam will share a funny anecdote about the time he was tasked with designing a thermal detonator for Master Replicas and he was allowed to actually handle the original prop used in the movie at the Ranch.
Do you collect prop replicas? And if so… which ones? Lightsabers? Blasters? Other things? 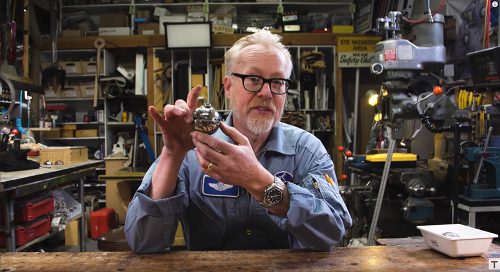 While many have probably heard of vacuum forming, I suppose that many have never really seen the process. The original Stormtrooper armor was vacuum formed for example, but the process was used for many other things as well. In the following video former Mythbuster Adam Savage shows you in great detail how to build a model starship prototype with vacuum forming. And in the video he reveals that all the starship prototypes for Star Wars Episodes I, II and III were made exactly like this. While the video is quite long, more than 30 minutes, it’s well worth a watch and seeing how some sheets of white plastic turn into a veritable starship prototype is very interesting. You will also learn about what is called “greebling”, one of the very early examples of that was seen on the extremely detailed and intricate models for 2001 A Space Odyssey, even though the process had a different name during filming of the movie and the term “greebling”, or “greebles” for the parts themselves, was coined during filming of Star Wars. But the process was well known at this time. Watch the video to learn everything about it! Anyone who is even remotely interested in what it used to take to create highly detailed physical plastic models or prototypes for a movie from scratch before the advent of 3D printers should check this video out!