Welcome To The World Of 4K Star Wars!

That’s right! After all the rumors of 4k versions of the entire saga coming for quite some time now, Disney+ shows up and says “SURPRISE!” The entire Star Wars saga (minus Solo and The Last Jedi which are licensed out currently) are available in 4k and also apparently with Dolby Atmos. I know where I’ll be for the next 24 hours, how about you? Now, we can only hold out hope that when they come to Blu-Ray we get our fabled theatrical releases as well. You can sign up for a free trial and see the first two episodes of The Mandalorian if you are still on the fence.

You can sign up for a free trial of Disney+ right here!

P.S. Despite being scheduled for a 9 am EST release, The Mandalorian is live and we’ll have reviews coming!

Cover art for the Target exclusive Solo 4k Blu-Ray has been revealed. With the exclusive edition you will also get a 40 page art booklet. Apparently the release comes with three discs and some exclusive bonus features. Not much more is known at the moment. Click through for the full cover and a photo of what’s inside case!

END_OF_DOCUMENT_TOKEN_TO_BE_REPLACED

The Last Jedi Now Out On Blu-Ray And DVD!

The Last Jedi was is released on Blu-Ray and DVD today. The movie comes with several bonus features. Click here for more details on the disc release, including a look at some concept art for the Battle of Crait. 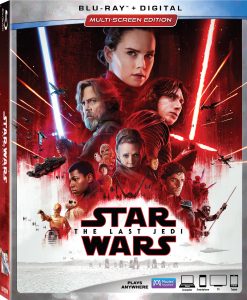