Yes, indeed... we are talking Tatooine.

If there was a centre to the galaxy, then Tatooine is the planet farthest from it. At least, according to a certain not entirely unknown farm boy. And yet a very important part of the Star Wars story plays out on exactly that remote planet.

It is the place of birth of none other than Anakin Skywalker, later known and feared as the Dark Lord of the Sith Darth Vader. It is there that young Anakin would meet the woman of his life, but also where he would bury his beloved mother Shmi. It is here as well that the male part of his twin offspring, Luke Skywalker, was hidden away from him to grow up under the watchful eye of a Jedi Knight who survived Order 66, Ben (Obi-Wan) Kenobi. It was there that a young Luke would team up with the crew of the Millennium Falcon to begin an adventure of a lifetime that would rid the Galaxy of Sith evil.

So it is no wonder that the names of Tatooine’s locations still ring out to us: Mos Espa, Anchorhead, Toshe Station, Mos Eisley... they bring with them the association of harsh desert life and profound alien customs and construction styles.

It’s all the more surprising, therefore, that this sandy world is in reality not all that far away. It’s just a few earthly hours away in a perfectly un-alien airplane...

It’s no big secret for the avid fan anymore: most of the Star Wars Tatooine desert scenes were shot in Tunisia. And it is there that Jedi-dares-all Mark Dermul takes us in the photo report you’re now browsing.

Mark has been to Tatooine... sorry, Tunisia four times now. His first voyage in 1994 would keep him in the Northern part of the country and thus well out of the Jundland Wastes. But the hunger for adventure was kindled and during his later trips in 2001, 2003 and 2005 he would track the Star Wars filming locations down to the last one (and actually also some Indiana Jones shooting locations). In a few days from writing this article, Mark will actually be headed for Tunisia for the fifth time in what he claims is the final, final “Tatooine Tour”... yeah, right.

And just giving you the list of the places Mark was able to find back under the Tunisian sun and sand is impressive by itself: the Mos Eisley Cantina, the Dewback tethering post and Stormtrooper checkpoint, the Crash Site Memorial (Mos Eisley was built around the wreckage of the colony ship Dowager Queen), the alley from which the Falcon could be seen lifting off during its daring escape, Ben Kenobi’s hermitage, Tosche Station, the Mos Eisley outskirts, Skywalker Alley and the Slave Quarters as seen in the Phantom Menace, the Mos Espa Courtyard, the Lars’ Homestead interior and exterior Courtyards with the Hydroponics Gardens, Dining Room and Beru’s Kitchen, the craters from the classic scene where Luke watches the twin suns Tatoo I and Tatoo II set, the Jawa Camp (Sandcrawler’s parking spot), “Star Wars Canyon” (Tatooine Bluffs) including the rock where the Jawa’s captured Artoo, Artoo’s hideout and the Tusken Terrace, the Jundland Wastes, the Dune Sea where among others you can spot the Escape Pod crash site and the Krayt Dragon Ridge, the Sith Infiltrator Landing Site, Darth Maul’s lookout and the cliff Maul took so hardily with his Sith Speeder, the Jedi Duel site, the fields Qui-Gon crosses on the eopie and where the Royal Naboo star ship landed, young Anakin’s outdoor Podracer workshop and then Mos Espa including Jira’s fruit stall, Watto’s junkshop, Sebulba’s dining place and some intact moisture Vaporators. Mark even tracked down the locations of the ANH Vaporator standing spots and the AOTC graveyard where Shmi was buried!

It’s impressive enough to just read the list, but it’s even funnier to actually have been there. Mark can vouch for that. You would be able to see for yourself, for instance, how the staircase in the Lars’ homestead that Mark Hamill ran up, abruptly ends at nothing. He would actually “appear aboveground” about 300 kilometres further down to the West of the country, where the upper dome of the Lars’ moisture farm can be found.

When you’d be making a trip like this one, everybody will experience it differently. Mark himself was awed the most by the way the moisture Vaporators at Mos Espa were put together. He can still go about them for minutes on end, about the genius it took to make them look so “real” while the bolts that hold them together are nothing but wine bottle corks. Others who accompanied Mark on his travels vowed that watching the sunset near the craters next to the dome of the Lars’ homestead was an unbeatable magic experience even if you had to imagine Tatoo II, the second sun, yourself. 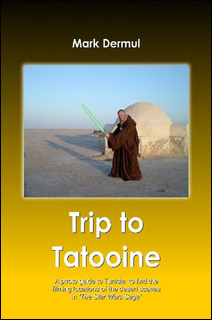 Many fans have dreamt about visiting the Star Wars locations in Tunisia and some have actually stepped into Mark’s footsteps too. It is a unique Star Wars Experience, worthy of the loyal fan.

If you happen to be planning to do the same it is probably a good idea to pick up Mark’s book “Trip to Tatooine”.

The book doesn’t just contain Mark’s own story adorned with a mass of colour pictures, but also valuable tips and tricks about how to organise the trip in a no-nonsense approach: what to pack, what documents to take, precautions to take, the required budget to reserve, how to spend it right and so much more. Next to that you get no less than 12 essential maps in colour print that will take you straight to the sets. It is honestly a must-buy for any fan who is planning to undertake the voyage.

All information on the book and Mark’s adventures can be found at http://www.markdermul.be/tatooine.

Aching to withstand the infamous Tatooine sandstorm yourself? Meet you just outside Jawa Camp on the Tusken Path!

Click Here to Go Back to the Main SW Experience Page