Are you familiar with the sixth planet in the remote Hoth system? You’re a Star Wars fan roaming a fan site, so of course you are! This planet is, very conveniently, also called Hoth.

How the planet got by the name “Hoth” will probably remain a well-hidden mystery forever. Our educated guess is that the naming was done by a bunch of alien minds that get intoxicated easily in a thin atmosphere, because the planet is as far from “hot” as you can possibly imagine. “Coldh” would have been a far better name and “inhospitable” is an obligatory word in any description of the sodden ice planet.

Hoth is a barren rock of snow and ice and if that’s not enough by itself, the nearby asteroid field will constantly send showers of small meteors to the planet surface to kill off anything that wasn’t yet frozen to death.

But there are still other charming ways to get yourself killed on Hoth. Running into a Wampa is likely to do the trick, for example. The beast is a nasty predator that just can’t keep its paws to itself. The Wampa will usually content itself with Tauntaun on the menu, but certainly won’t say ‘no’ to a good piece of human meat either. And variety does make for a good and healthy diet, so...

I think it’s firmly enough established that you don’t want to go to Hoth unless you have a good big deal of hiding to do. If you’re a small group of Rebels fighting an Empire at the height of its might or had a run-in with the taxman, for instance. But other than that? No way. Go there for a holiday? I’d rather go on a picnic with the Fett family unarmed while I have a price on my head!

And yet this article is precisely about that: a leisure trip to Hoth. Because that’s exactly what Mark Dermul did as soon as he got back from his trip to Tunisia-Tatooine: he jumped on another plane and travelled to the icy plains of Norway, where a number of the outdoor Hoth scenes were filmed for “the Empire Strikes Back”.

I can already hear you think (well, I can’t, obviously, but you know what I mean): Oh come on! If you want a Hoth panorama, you can just as well wait for the snow and ice of your own local winter. Snow looks the same everywhere. You don’t have to go to Norway for that! It tremendously pleasures me to let you know you’re entirely wrong about that.

Granted, the list of movie locations you can actually recognize is –especially when you’d compare with a shooting location like Tunisia-Tatooine– rather limited, but it is still worthwhile to actually go there and especially if you care about the “behind the scenes” aspect of the Star Wars universe.

So what are you getting out of a voyage to Finse, Norway?

Mark plowed the snow until he identified in and around the Hardangerjøkulen glacier area: the Hoth Battlefield, the Echo Base location, the Imperial Probe Droid’s crash landing site and the rock where it auto-destructed, the Shield Generator location, the shelter location where Luke spent a night in the Tauntaun’s innards and the Falcon’s escape path. If you take along some of your Hoth toys (come on, we know you have them!) and you are just a tad handy with camera angles then you will actually be able to re-create some of the memorable ESB scenes with those!

But as I wrote before, the “BTS” content of this trip is probably bigger than anything else. To find the above locations you will just have to check into the Finse 1222 Hotel, which is the exact same hotel where the Lucasfilm crew stayed for the ESB shoot. As a commemorative, the hotel even sports a small museum about that little fact. 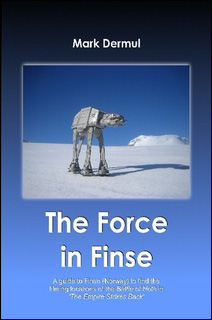 Mark, with an unbelievable track record when it comes to such things, was also able to get in touch with one of the original ESB Snowtroopers and as a result one evening meal in Oslo was spent in the good company of Sigbjorn Henanger, who appeared to be a jolly good chap not only willing to share his memories about his filming days but also sign the collectibles the “Hoth Hoppers” had brought with them.

Still thinking a trip to Hoth is an unholy undertaking? I can read from the twinkle in your eye that you are starting to think differently.

If you would actually plan on visiting Hoth, it is a very good idea to pick up the travel guide Mark wrote about this adventure, “the Force in Finse”. Besides the obligatory travel report (with lots of colour pictures) and Hoth GPS locations, you will find everything that you need to prepare for the trip in this book, including a budget calculation, addresses, packing tips and general information about travelling to and in Norway. I dare say this manuscript is a quintessential accessory to your trip.

All information on the book and Mark’s adventures can be found at  http://www.markdermul.be/hoth.html.

Feel like wrestling a Wampa or throttling a Tauntaun sliding down a glacier? Go north, go Hoth! And make sure to look me up in the Echo Base cantina when you’re there!

Click Here to Go Back to the Main SW Experience Page