You may have missed it, but last week Hasbro did yet another annual Star Wars fan site Q&A. Several fan sites were invited to ask their questions and over the course of four sessions brand manager Jing and designer Chris answered them. Well, as usual, the answers given were mostly corporate speak of the typical generic nature, but here and there Chris, mostly just Chris, gave a straight reply, brand manager Jing was mostly responsible for the corpo speak, which is of course her job, she is the brand manager after all. But one of those straight answers was about vehicles in the Black Series. So what did Chris say?

And of course Hasbro was also asked about the Boba Fett tax and very high prices (several times actually) and Hasbro’s answers were… interesting… So click through for more! 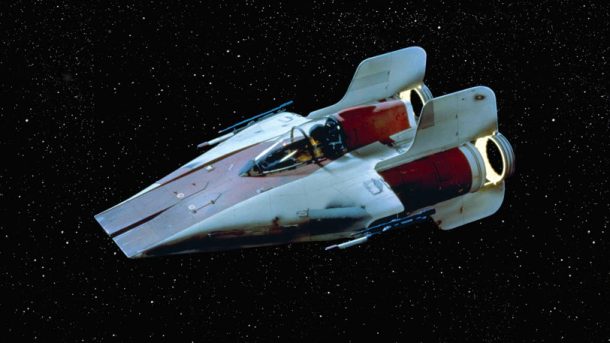 Not coming to a galaxy near you

Vehicles in the Black Series

When asked about the chances of an A-Wing in the Black Series Chris gave one of the very, very few straightforward answers. Hasbro usually is very evasive and resorts to corporate speak in these Q&As, of course both upper management and Lucasfilm/Disney prevent any Hasbro employee from being truly open about things. But as I said, when asked about the A-Wing Chris opened up and actually gave a straight answer.

And according to Chris the chances of getting an A-Wing in the Black Series are virtually zero. But he elaborated, the chances are virtually zero, because sales of previous Black Series vehicles were not as great, Chris explicitly said that Black Series vehicles don’t perform as well, and worse than TVC vehicles. He also cited the size of the A-Wing and the resulting exorbitant cost as another reason it will not get made. Now the A-Wing is barely bigger than the Snowspeeder, so the size argument is something I find difficult to believe and it sounds more like an excuse here.

Chris’ statement does go somewhat against what Hasbro used to say in the past, that things like the First Order TIE Fighter did quite well for them, but it’s easy to believe Chris here. Hasbro is not in the habit of making things that underperform and there have been no new vehicles (or bigger creatures) in the Black Series line for quite a while now, with nothing being announced either, not even in the pipeline.

Of course Chris (and Jing) immediately said that should fans REALLY want an A-Wing or if new entertainment is released that features an A-Wing and it’s suddenly the most popular thing in the universe… they would rethink their decision. The usual “never say never” statement.

But let’s be realistic, the chances of the Black Series getting an A-Wing or even the much more recent N-1 Starfighter from The Mandalorian are more or less zero. There is even a distinct lack of vehicles in the Vintage Collection, unless it’s an old vehicle just with a new coat of paint. Hasbro is focusing much more on dioramas for TVC these days.

And let’s be honest, the Black Series is mostly a figure only toyline, which is ok. There aren’t all that many Marvel Legends vehicles either, most of the 6 inch scale collectors are primarily interested in the characters.

Okay, so what about some other answers?

When asked about the Boba Fett tax (they were asked a few times about that across all four sessions) both Chris and Jing tried their best to come up with an explanation.

I do wonder here why previously Boba Fett figures did cost the same as any other figure… and why straight repaints of Boba figures released before are also suddenly much more expensive.

Now I do believe Chris here, all the action figures still require manual labor to paint and assemble them, but the real question is how much that manual labor for Boba actually impacts prices and why previous Boba figures didn’t have higher prices.

Actually, Bossk’s Bounty did point that out and asked why the original Return of the Jedi Boba Fett was $12.99 and why the repainted TVC comic book version of Boba entirely based on the previous ROTJ figure is now $22.99. Chris’ reply here? Tooling and development costs are not fully amortized with the initial release of a figure (which means Hasbro takes a loss???? REALLY???? For a Boba Fett figure that always sells?) and that each production run of course requires manual labor. In my opinion Chris’ reply here makes no sense and is a very weak excuse to justify insane price hikes. Neither Chris nor Jing ever talked about the goals set by Hasbro CEO Chris Cocks for much higher profit and profit margins.

When asked about high retail prices, especially for various exclusives, and sustainability of the hobby in general with prices like these Jing stated that retailers set the price. In short, she shifted the blame to the retailers. Jing also admitted that they get that question “a lot”. Who would have thought?
What Jing didn’t tell is that Hasbro does of course set the wholesale price in the first place and that the retailer’s margins go on top of that and that wholesale prices set by Hasbro will have an impact on retailer prices. She also failed to mention anything about Chris Cocks’ goals to increase profit margins to 20% or to increase profit by 50% until 2025. She also failed to mention that Chris Cocks, her CEO, observes some resistance to ever increasing prices for Hasbro toys, as pointed out in my article from Saturday about Hasbro’s current business strategy.

Chris was also asked why the Vintage Collection Cassian Andor Aldhani figure is screen inaccurate, whereas the Black Series version IS screen accurate. The TVC version has the wrong boots.

Chris replied that they had limited budget for the TVC figure and thus had to resort to kitbashing. In short: the Hasbro Star Wars team has a limited budget and with Hasbro’s current strategy it’s not too unlikely that said budgets are tight, you can increase profit margins in two ways basically, higher prices and reduced production costs.

The Various Issues With Plastic Free Packaging (Swaps And Theft)

Hasbro was also asked a few times (twice or so) about the plastic free packaging and reports by various collectors that figures get swapped and accessories stolen from the windowless boxes.

Jing merely said that in this case collectors should contact Hasbro customer service, and that they will take care of it… Hasbro also made a vague promise that they are looking into making the pfp boxes “more secure” in the second half of 2023.

Why All The Sweaty Faces In The Black Series?

And one final interesting tidbit maybe is the reason for the sweaty sheen on so many Black Series photoreal figures.

Chris explained that the factories in Asia did receive instructions by Hasbro to use a matte spray finish to avoid this sweaty look, but that factories in Asia simply forgot to apply the matte finish. But going forward this should no longer be an issue. You do wonder here why a) Hasbro does not receive production samples and b) then reminds factories to please use the matte finish for the faces and c) instead just lets the factory keep mass producing the figure with a sweaty look. How can the factories even “forget” about Hasbro’s instructions to begin with?

For the most part the four Q&A sessions make for a very dry and very boring experience. Too many fan sites just asked softball questions, only a few people at least tried to ask the hard questions that are of actual interest. And to Chris’ credit, he did give a few more or less straight answers, as much as he is allowed to.

So maybe it’s no surprise that almost all of those Q&A videos only have a couple hundred clicks, I believe Bossk’s Bounty’s video on his channel actually performed the best, almost 4,000 clicks. Incidentally Bossk’s Bounty is also one of the few who asks actual questions that interest collectors. Other fan sites asked things like… “what are you doing for all the new collectors who entered the hobby with The Force Awakens”… well, look at retail shelves, note the number of newly released sequel trilogy based figures you can find (zero), look at previous retail performance of sequel trilogy Star Wars action figures (quite bad), remember that both Black Series and Vintage Collection are almost exclusively for adults who grew up with the Original and Prequel Trilogy and you have your answer…

Here are the links to the four Q&A sessions. If you really want to hear it all for yourself.

Bossk’s Bounty was part of this session. His question were good. Mark from Yodas News also asked pretty good questions. Bossk’s Bounty is the one who asked about the screen inaccurate Cassian Andor Aldhani TVC figure and then wanted to know why the latest TVC Boba Fett figure is so much more expensive than any Boba Fett figure before and flat out asked Jing if Hasbro is not concerned that a$22.99 TVC figure may people drive out of the hobby. The replies were not always as good as the questions though. As mentioned, Jing tried to shift the blame for high prices somewhat to the retailers and Chris elaborated and claimed the first release does not fully amortize the costs. Okay… Chris later also gave a reply about the screen inaccurate TVC Cassian figure. He was a bit late for the Q&A and joined only after a few minutes.
Actually, Hasbro was asked yet again in the very same Q&A session why their prices are so high by Mark from Yodas News and what they are trying to do to keep that in check in 2023. Mark didn’t mince any words here, since he flat out told Jing that fans are concerned about the sustainability of it all. Jing provided a different non-answer this time and she visibly squirmed while dodging the question and never answering anything. Fast forward to the 10:15 minute mark to see the question and Jing’s reaction.
And Steven aka FlyGuy wanted to know why so many Black Series figures have this sweaty sheen, which resulted in a more or less straightforward answer by Chris.
Mark from Yodas News also wanted to know how it’s possible that many exclusives are never found at Walmart etc but then turn up at Ollie’s. Jing’s reply, to her knowledge this is “not the norm” and that they work closely with the retailers, but that retailers ultimately determine the production run (which is true).

Here Hasbro was asked yet again about the Boba Fett tax, same reply by Chris.

In this session James from Geekstronomy asked the A-Wing question which did result in one of the few straightforward replies. Fast forward to the 11 minute mark or so to hear it for yourself and Chris’ reply.

And if you want to have fun: take a shot of tequila or any other liquor each time Hasbro (mostly Jing) says that they “appreciate the comment or question” and “appreciate the fan feedback” and how they are “always listening to the fans on the various fan sites and social media channels”. If any of you make it through all four sessions alive please report back. I suggest buying several bottles of tequila for that game.

So what do you think about Hasbro’s replies to the questions?