The amazing AT-RT will also be available as a set with the ARF Trooper. Click through for full details on the ARF Trooper and 501st Legion AT-RT (TMS091) 1/6 Scale Set! 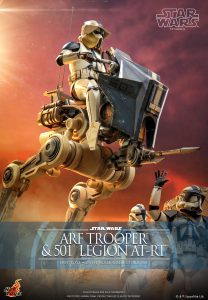 The ARF Trooper collectible features a set of greatly detailed helmet and armor, a blaster rifle, a blaster pistol, a pair of binoculars, and a display base.