This last week or so I took advantage of some sales on Dorksidetoys.com. Six TVC figures made their way to my house. I also had a frustrating Target experience, and I need to vent! Something for everyone today… Click here to read about it.

What am I a bigger fan of than TVC figures? TVC figures… on sale. Dorksidetoys has a pretty good sale going on with several TVC and TBS figures discounted. I got 3 heavy stormtroopers and the Force Unleashed stormtrooper commander, among others. 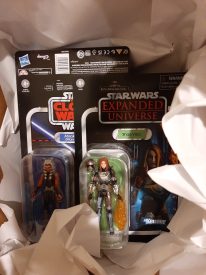 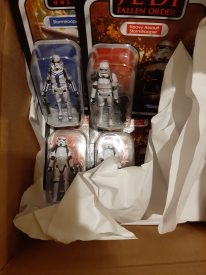 ShopDisney.com also delivered their goods last week. I’m very glad I got B2-EMO. It’s a great figure, and he’s a fun little character in Andor. I think I may paint the second one. 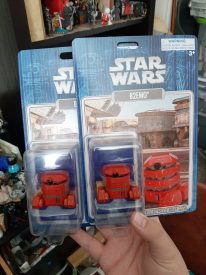 I also finished up those mudtroopers I posted about last week. I will happily buy a few more if Hasbro decides to make their own. 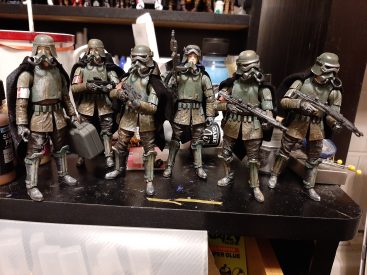 Lastly, a bit of venting about my Target experience this week. There have been many reports now of Boba Fett (Morak) hitting stores. I went to a Target by my employer in the morning before work, and a helpful employee scanned the barcode, advised me they had a case in the back, but was unable to find them after going to check. Later, I went on my lunch break and a less helpful employee told me it was still in stock and likely on one of the carts of toys he was stocking. He wasn’t going to check but told me to come back later.

Sure enough, I checked back after work around 7pm hoping they would have been stocked like the TBS Dark Troopers I saw on the pegs. I wasn’t able to find them, so I asked another employee. He scanned the barcode and let me know they were all sold out. Needless to say I was frustrated.

Hoping to quell my annoyance, I stopped at another Target on my way home that good old Popfindr said had Boba in stock. An employee scanned the code, and informed me that, not only were they out of stock at that store, the store I had just come from still showed them in stock! Either the employee I talked to at the first store lied to me, or a scalper came and bought them in the 3 hours between lunch and the end of the work day and the system hadn’t updated yet.

Either way, it’s frustrating to put that much work into an already overpriced figure. Hopefully Axe Woves won’t be so difficult to obtain; I want him more than another Boba Fett anyway. Have you had an easier time finding these figures?