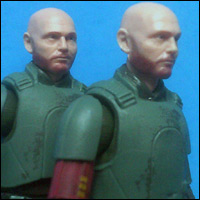 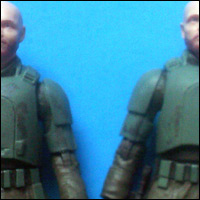 Paul and team, today I received two of the VC229 Target-exclusive Migs Mayfeld figures I’d ordered and the box included what appear to be two unique variations resulting from a running change to the figure. Promo and cross-sell photos clearly show a red band with yellow accents on the right arm as we’ve seen before on shoretrooper figures since 2016’s TBS-Phase 3 Shoretrooper — this figure shares several parts with the original Shoretrooper — and early samples with datestamps of 20871 and older include this feature. Figures and cardbacks with datestamps of 20971 and later have omitted this marking. The card art image has no red band (it’s just at the left edge of the photo), so it’s likely this is an intentional update and running change to better match the uniform seen on-screen. Photos included aren’t the best quality, but demonstrate the difference between the variations. Could a TBS-6-in change be in the works, too? Warning to carded collectors: my figures had large Target-applied bar code stickers across the back of the cards. Happy hunting, and variant collectors rejoice (or cringe)! Thanks as always.