Ideas For The Next Black Series HasLab

With the second failed Black Series HasLab in a row the question is what could be next. To put the blame for the two failures on the Black Series as a toyline is shortsighted, since both HasLabs were either half-baked lazy attempts (Rancor) or mindboggling choices (Reva’s lightsaber, really???) to begin with.

It’s a moot discussion about who’s to blame here, it’s most likely Lucasfilm in my opinion – with some assistance by the Hasbro Star Wars team. The big question is if Hasbro should give the Black Series one more try at HasLab.

We will not talk about potential TVC HasLabs here, since TVC has several no-brainers that would almost certainly be a success, like the Death Star Playset, the Cantina from A New Hope, maybe a Sandcrawler or even the Ghost from Rebels (with crew). It would be a good idea to have the next Star Wars HasLab be a TVC item and only after that Hasbro should revisit the Black Series.

So what would be some good choices (for a change!) for a Black Series HasLab? Click through for my ideas and then add your own ideas and suggestions in the comments. Lucasfilm and Hasbro seem to be in dire need of some help here! 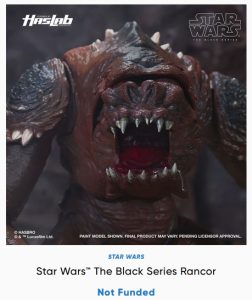 The Black Series can do better!

The Black Series has a somewhat different focus than The Vintage Collection, playsets and most vehicles become too unwieldy and big in the 1/12 scale, so the focus is mostly on figures. But there are a few vehicles and even playset inspired items that could be realized in the Black Series.

Idea #1: The custom Naboo N-1 Starfighter used by the Mandalorian in The Book of Boba Fett

The Mandalorian is without a doubt the hottest Star Wars entertainment at the moment, Mandalorian branded toys sell very well, and it’s not just Hasbro who sell a ton of Mandalorian toys, other companies such as Funko do as well.

So how about a Mandalorian themed Black Series HasLab? The Razor Crest brought in record numbers.

And in my opinion the customized Naboo N-1 Starfighter given to Din Djarin in The Book of Boba Fett is a prime choice here. The vehicle is still small enough that it can be displayed without too many issues and it’s visually striking.

So how it would work?

Basic Unlock: N1-Naboo Starfighter with a new-ish (kitbashed with some new accessories plus cloth cape of course) Mandalorian figure and a new-ish (kitbashed) Grogu, Grogu must have his chainmail. The two figures don’t need to be all new, let poor Hasbro save some tooling costs, the main attraction is the starfighter. The finish should be shiny of course.

Length of the starfighter would be 91.7 cm (36.1 in) in true 1/12 scale. So about the size of the Khetanna / Razor Crest. However, let’s be reasonable and let Hasbro underscale the vehicle by roughly 20% by shortening the tail end and front section somewhat. So an underscaled N-1 starfighter would be 75 cm long (29.5 in). Still pretty large but the size is manageable.

And the Starfighter can have quite a few tiers that complement the set.

Price could be $350 maybe. Only Peli Motto would be an all new sculpt, everything else can be kitbashed or repainted/repacked, so that should be a plus for Hasbro, since it keeps costs down. And of course Peli Motto & the droids and the kitbashed Jawas should also get a general release, put them on cardbacks for HasLab to make them exclusive.

Think about the prequels whatever you like, there is little doubt the movies were extremely toyetic with tons of great designs. And I think a Geonosis Arena inspired HasLab could do well. And it would also allow Hasbro to cross sell a metric ton of additional figures in the basic line.

Basic Unlock: Acklay, Nexu, Reek & new-ish (kitbashed/repainted) Obi-Wan, Anakin and kitbashed/repainted battle damaged Padme & three pillars (make it four if Hasbro is generous for a change) – so everything you need! Accessories for the figures should include the blaster for Padme and the two replacement lightsabers for Obi-Wan and Anakin, a picador spike / lance should also be included so Obi-Wan can fight the Acklay! Ideally, a cardboard backdrop is included at no extra cost, i.e. it’s NOT a tier!

All three creatures are considerably smaller than the Rancor, but of course they all require all new tooling. To offset this the three included figures would hardly require any new tooling, a new torso piece and arms for Padme are required, that’s pretty much it. The pillars should have metal chains of course.

Here are my suggestions for some tiers that would probably make people happy.

Other possible tiers would be…

– battle droid with C-3PO’s head (as an alternative to the droideka)
– battle droid with C-3PO’s body
– a Geonosian picador
– the picador’s mount (Orray creature)
– every prequel Jedi known to mankind
– a kid Boba Fett
– and depending on production costs and how much it would add to the price even a arena diorama piece made of plastic (the main gate with the viewing stand for Dooku, Jango Fett, the Viceroy etc) is a good idea for a tier

However, I would argue that Hasbro could sell the prequel Jedi in the basic line, they should sell, and here I talk Ki Adi-Mundi, Shaak-Ti, Barriss Offee etc. Also, the Super Battle Droid and Droideka should get a mainline release, so put the figures on cardbacks for the HasLab maybe to make that exclusive to the set. And if the droideka would make the HasLab too expensive just release it in the mainline as a deluxe set. I am pretty certain it would sell.

Price could be an issue here… I don’t think it would be less than $400 since a lot of new tooling is required. However, Hasbro would have an excuse to rerelease Mace Windu, Jango Fett, Count Dooku, Kit Fisto, Plo-Koon, the battle droid and probably a clone or ten! And they might even sell because of the new possibilities to pose them with the HasLab set. A perfect opportunity to offer this HasLab would be in 2026, so that the set will be released in 2027, just in time for the 25th anniversary of the movie release. Hasbro let an opportunity go to waste by offering basically nothing for the 20th anniversary.

The rather compact TIE Advanced is one of the few spaceships that are still relatively easy to make in 1/12 scale, unlike the X-Wing which would be very huge, with a considerable length and wingspan and would therefore probably be too unwieldy for many.

As you can see the dimenions are no issue here, Vader’s TIE is very compact and size is very manageable! Even in true 1/12 scale!

Basic Unlock: TIE Advanced Prototype and Darth Vader figure (repacked). The TIE MUST have lights and electronics. That is, cockpit lights and ion engines and lasers that light up when you push a (well concealed) button. With an option for an always on light for the cockpit / ion engines. The fuselage should provide enough space for the necessary electronics. A flight stand is included!

Now the issue here are the tiers, since nothing really suggests itself here, so maybe the TIE Advanced HasLab would have no tiers. Price would be a bit cheaper however. Maybe $250? The vehicle is much more compact than the Razor Crest and Vader would be a rerelease. So only the ship needs new tooling. The somewhat lower price point could be a real plus here. You may argue that the TIE Prototype is so compact that it could also be a mainline release, but the added electronics and more attention to paint details could elevate it to a HasLab item.

The AT-ST is yet another vehicle that can certainly be realized in the Black Series, size is still manageable and a Return of the Jedi version can have quite a few tiers and Hasbro would also be able to sell additional figures in the main line to complement the set.

Basic Unlock: now this depends on what you want your tiers to be. I would say it’s probably best to offer a new-ish (kitbashed) Chewbacca and his two Ewok co-drivers to the vehicle. And yes, the AT-ST NEEDS electronic cockpit lights! So basic unlock would be the AT-ST with a kitbashed Chewie plus the two Ewoks.

Tier 1: the two Imperial drivers
Tier 2: logs (the ones that trip one of the AT-STs) OR two additional (kitbashed) Ewoks
Tier 3: small diorama add-on with two tree trunks and logs than can swing from the trees to crush the AT-ST OR even more additional Ewoks
Tier 4: Bunker door diorama

If the pesky Hasbro managers remind you of profit margins here is an alternative: Basic Unlock only includes the vehicle and a kitbashed Chewbacca (new portrait).

Price should be in the $400 range or more. And Hasbro can rerelease several TBS ROTJ figures in the main or archive line and also make a few more Ewoks.

There are other options of course, a Millennium Falcon Cockpit or Recreational Area was suggested, or maybe an A-Wing even, but I feel the former may not be too exciting for many because all the figures you’d get would be repacks (unless Hasbro would retool ANH Luke from the ground up, something I suggest they should do anyway!) and the Recreational Area with the holo chess table has the same issue with the figures.

An A-Wing is quite compact and could even be a mainline release similar to the Snowspeeder. And it’s not as iconic as Vader’s TIE Advanced. But it may be a HasLab option if the tiers give you all the Rebel pilots you need. But still, I feel the TIE Advanced Prototype is the much better vehicle option for HasLab as well as the N-1 starfighter used by Mando.

My personal favorite is the N-1 starfighter since it’s a) based on current and popular entertainment (which may be important to Lucasfilm) and b) you can get a lot of good tiers with it. The TIE Advanced would be an ideal choice for a somewhat more affordable Black Series HasLab and the Geonosis Arena may be a bit more expensive, but could be something that would do really well, especially if released in 2027 and combined with a marketing push for a 25th anniversary AOTC toyline. It would also be the perfect opportunity to release the Super Battle Droid, Droideka and a few more prequel Jedi.

The AT-ST could always be offered, it should have been this year’s HasLab for the 40th anniversary of ROTJ in 2023. But this set doesn’t really require any anniversaries, just like the TIE Advanced is a timeless classic that you can sell any time.

So what are your thoughts and ideas? Do you have any suggestions for a future Black Series HasLab?