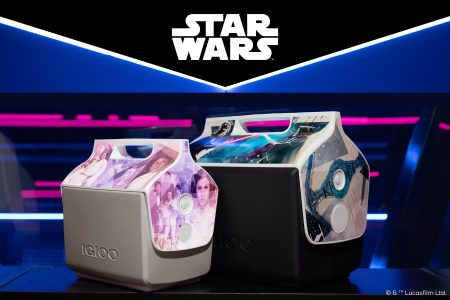 “It’s a true honor to continue our collaboration with Lucasfilm in dreaming up new ways to excite Star Warsand Igloo fans,” said Adrienne Berkes, Vice President of Marketing at Igloo. “And this time around, we’re championing a fearless female hero with the Princess Leia Playmate cooler as well as depicting a pivotal moment in the history of Star Wars with the Obi-Wan vs. Darth Vader Playmate cooler.”

With Igloo’s latest additions to its Star Wars-inspired cooler collection, Princess Leia makes her first appearance on the Playmate cooler through artistic graphics alongside glimpses of fan-favorite character art of R2-D2™ and C-3PO™. The Star Wars Obi-Wan Kenobi vs. Darth Vader Playmate Classic cooler is inspired by the ultimate lightsaber duel between the iconic Jedi™ Master and fearsome Dark Lord of the Sith™ in Star Wars: A New Hope™.

About Igloo:
Born from a modest metalworking shop back in 1947, Igloo has been instrumental in redefining how we live, work and play. What began with bringing clean water to the worksite quickly moved into super-functional, best-in-class ice chests. Igloo products made the family outdoor recreation movement of the 20th century possible. Suddenly, taking your kids camping on the weekend became easy and cross-country road trips became a summer vacation staple.

As we approach our next century, Igloo is 1,200 employees strong. We are proud to call—a 1.8-million-square-foot, three-building facility in—Katy, Texas home. With more than 500 products sold at thousands of retailers around the globe, we can confidently call ourselves the number one cooler manufacturer in the world.

And through it all we haven’t lost sight of our original goal—to create products that enable the pursuit of happiness (however you define it). That’s why we’re still working hard every day to innovate, create and make it easier for you to get out, work hard and play even harder.

STAR WARS and related properties are trademarks and/or copyrights, in the United States and other countries, of Lucasfilm Ltd. and/or its affiliates. © & TM Lucasfilm Ltd.