And that’s it… The Reva Force FX Lightsaber HasLab ended with a resounding “thud”. Final backer number is 1,413, which is not even close to the 5,000 people who were needed. That is the second failed Star Wars Black Series HasLab in a row. Hasbro and Lucasfilm should do some deep soul searching and evaluate the situation.

Why did the Black Series ever get these extremely lackluster HasLabs to begin with? The Rancor looked merely “ok”, but not great, the tiers were a bad joke (a cardboard backdrop, really? Repacked figures?) and Reva’s lightsaber was dead in the water right from the start. Whoever thought people might want that? Either Lucasfilm or Hasbro (or both) need a reality check. Well, they got one for free now with a failed HasLab that only convinced a little more than 1,400 people to back a Force FX lightsaber for a brand new Star Wars character that is maybe not as popular as Lucasfilm would like it. 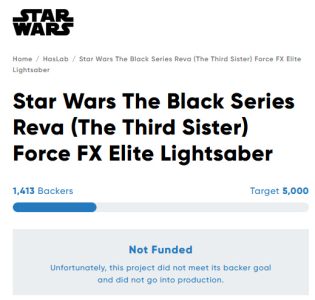 Next Article: It's Amazon Prime Day!