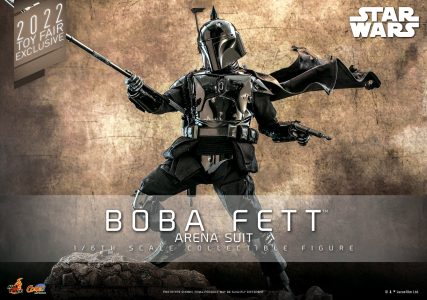 In the Star Wars: War of the Bounty Hunters™ comic, fans learn what happened to the infamous bounty hunter before he can deliver the frozen-in-carbonite Han Solo™ to Jabba the Hutt™, Boba Fett’s journey has not been smooth as he is forced to hide his identity to fight in dangerous arena battles…

The collectible figure is skillfully crafted with all-black Mandalorian helmet and armor, a black jumpsuit, a jetpack, a spear, a pair of blaster pistols, a blaster rifle, and a display base!

This unique look of Boba Fett will surely be a great addition for any Star Wars collectors!