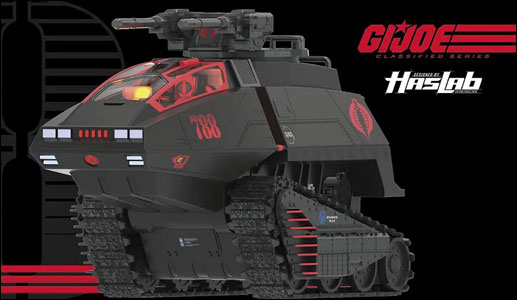 There is something very wrong with Star Wars and the Star Wars Hasbro brand if a recent Star Wars HasLab has failed, but the GI Joe HasLab for the Cobra H.I.S.S. backs in less time than a work day. Hasbro has a lot of soul searching to do. Collectors have spouted time and again what we want to see HasLab be used for and clearly explained what specific items we wanted to see on this platform: The Death Star. The Cantina. Jabba’s Palace (the REAL one). The failure of the HasLab Rancor might remain a permanent stain on the Star Wars brand, but even if it was the worst idea for a HasLab, they could have salvaged the disaster it was by making it interesting or including things that would have made a pass nearly impossible. Malakili at the eleventh hour? Yeah, OK. Seriously. And let’s not forget about the cringe we all felt when Hasbro announced the next “LOL!” HasLab project roleplay item for that Nightsister character (or whatever she is) that absolutely no one cares about.

Hasbro, be careful who you poll for ideas and who you have in your focus groups. A lot of people have no idea about this IP. You’re listening to the wrong people, inside and outside of Hasbro. Oh and listen to collectors, you know, the ones that actually spend their money on your toys.

Next Article: The TVC The Mandalorian & Grogu (Maldo Kreis) On Sale For $15.90