Lucasfilm operates the Star Wars Kids YouTube channel, which is home to various videos and short clips aimed at very young kids. The game show Jedi Temple Challenge hosted by Ahmed Best was moderately successful with about 1 million views per video, Galaxy of Adventures also enjoyed some popularity (a couple hundred thousand views per episode), but other things like Roll Out flopped, later episodes of Forces of Destiny underperformed and most of the other content on the channel gets maybe 10k-30k clicks per video, many videos even have less than 10k views. The channel itself has 283,000 subscribers, of course not all of them are kids. Toylines for both Galaxy of Adventures and Forces of Destiny flopped and every survey known to us (the fans) basically tells us that the average Star Wars fan is 30+ years old, and when we talk about hardcore fans (the people who buy merchandise or are stupid enough to fork over $6,000 for a 48 hour trip to a Star Wars hotel) it’s probably closer to 40+ years. But of course no franchise can survive without a new generation of fans, hence why both Disney/Lucasfilm and Hasbro try again and again and again to engage kids. And now we have the latest attempt at engaging kids: Galactic Pals. A show about a droid nanny that gives advice on how to raise little Wookies, Ewoks and lots of other Star Wars creatures. And it’s another flop. Yet again. Click through for more! 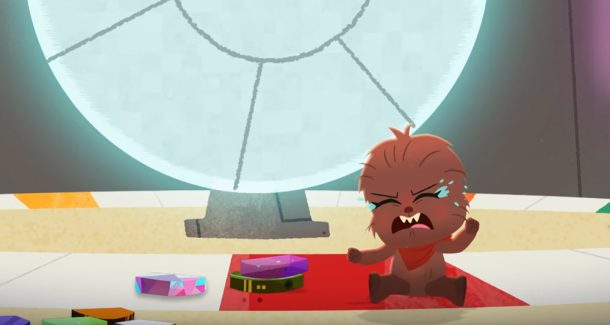 The little Wookie is a bit unhappy…

The new series of shorts was released yesterday with two episodes and a trailer. Episodes are very short, about 90 seconds each, the art style is very simplistic, everything looks cute of course, there is only one character with dialogue, the droid nanny Miree and in each episode (so far) Miree tells the viewer how best to engage with toddlers from various non human Star Wars species. Thus we learn that Wookies are prone to temper tanturms, who would have thought that… so the Wookie episode is all about how to calm down an angry Wookie. And we get lines of dialogue like this one: “How about a cookie for a Wookie… a Wookie cookie?” Likewise the Ewok episode is all about how little Ewoks are very shy, unless “they are the celebration”, which gets them out of their shell. One can wonder what the actual message for the kids here is.

And of course this series also has yet another toyline, from Mattel this time, who also make a Baby Yoda plushie. You can buy four different plushies so far, a Rodian, Jawa, Wookie and Ewok. This seems to be a Target exclusive toyline, each plushie is $29.99 – for now. They all have a vinyl head and soft bodies. And according to the official Star Wars website this is apparently the intended target audience for the plushies: 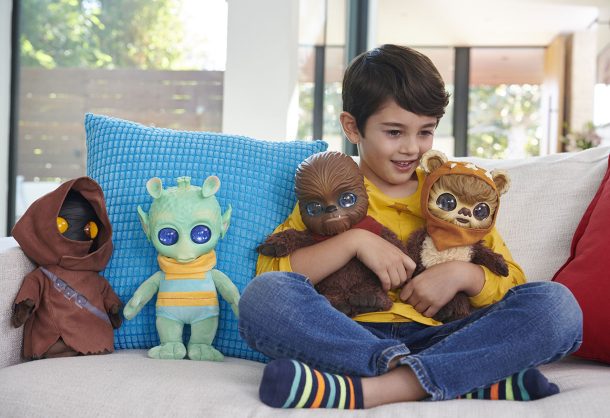 Little boys will love the plushies. For sure. Absolutely. Totally not for girls. I am almost tempted to quote Todd McFarlane’s statement about parents who buy Barbies for their boys here.

Now of course this series is aimed at very (VERY) young kids, but it’s doubtful the little kids will bother with this series. It’s only been about a day or so, but both the Wookie and the Ewok episode have 4,200 and 3,300 clicks. Which is just sad. Now the question may be if young toddlers should even be on YouTube and if that platform is the right medium to begin with.

To me it seems that Lucasfilm simply does not know how to produce great content for (very young) kids. They try different things, different approaches, they even try different ideas for toylines – but all of them fail. Which raises the question if there can be a future for a multibillion dollar franchise when kids apparently have very little interest in Star Wars. Back in the day, yes times were very different of course, it was enough to make great movies that engaged and appealed to people of all ages, kids, teenagers and adults. But of course in this day and age there is so much more competition for the precious time kids have, other franchises, electronic devices and a myriad of other entertainment options kids in the ’70s, ’80s and even ’90s didn’t have.

Maybe it’s time to rethink the entire approach. But what do you think? Is Galactic Pals something you would show to your very young kids? Do you approve of the content and the messages? Messages like… Wookies get angry all the time and cookies or braiding their hair calms them down and Ewoks only get out of their shell if they are the center of attention… Who approves this kind of content? What is the takeaway here for the kids? That throwing temper tantrums will earn them sugary treats? That they always need to be the center of the universe?

Do you like the new toyline? Do you think your little boy(s) will love to get them as a gift instead of Elden Ring?

You can watch the Galactic Pal episodes on the Star Wars Kids YouTube channel! But it’s really nothing for adults and most likely not even for kids.

You can buy the plushies at Target. Or maybe just wait for the inevitable discounts if you happen to like the plushies?