Would You Like To Get More Female Star Wars Action Figures?

About two weeks ago Todd McFarlane gave an hourlong interview to YouTube action figure reviewer Shartimus Prime. And while it’s not really about Star Wars at all, McFarlane Toys has no Star Wars license of course, it’s still a very interesting interview, since McFarlane provides some insight into the industry. So anyone interested in the business of making toys should definitely check out the interview and take the time to listen to it. Among other things McFarlane talks about how insane shipping prices became in 2021, from $2,000 for one container to $20,000. And he also talks in detail about the difference between a privately owned company like McFarlane Toys and the big players who are all publically traded companies with responsibilities to their shareholders. But what made a lot of waves are McFarlane’s comments about female action figures, namely his statement that female action figures simply don’t sell as well as male hero characters and that boys simply prefer the male heroes, even over the villains, and even more so over the female characters and that it would be a bad idea to make a female centric action figure wave, because it would not sell as well. It didn’t take long for the attacks to start, as usual on Twitter, but sites like Bleeding Cool also chimed in and disputed McFarlane’s statements. So today I want to ask you if you are happy with the female characters we have in the Star Wars action figure lines and if you’d like more female characters or think the number we have right now is ok. Click through for the discussion! 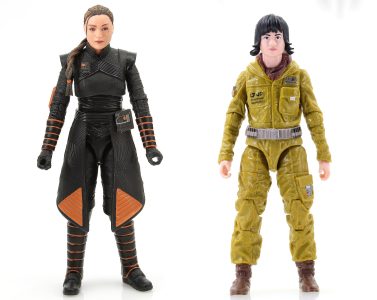 Todd McFarlane has been in the industry for 30 years or so. So in my opinion it’s quite funny to think a random person on Twitter or even some writer for some website, including me, know more about the toy business than the owner and manager of an actual toy company that makes action figures.

So his statement that female action figures, generally speaking, there will always be exceptions of course, don’t sell as well, not even remotely as well, as the male hero counterparts is nothing that I think any random person on social media or some writer for some website has any right to dispute. It can be tough when actual reality does not align with beliefs and agendas, but it is what it is.

However, and I am very much aware that I am NOT an expert, the question is how much Todd’s statement applies to action figure lines that primarily appeal to adults. Not boys. Of course we don’t know how many kids still want Star Wars action figures (no matter the scale), all we say here on JTA is usually based on anecdotal observations, but in the (hardcore) Star Wars collecting community it is generally believed that both TBS and TVC are primarily bought by adults for their own collections these days and that kids have become a minority.

Thinking back to my 8 year old self or so that got (bought) his first Star Wars action figures I readily admit that back then Princess Leia was probably the most boring Star Wars action figure ever for me. In the movie I identified with Luke Skywalker, certainly not Leia. She was ok as a character in the movie, but her figure was nothing I cared for. At all.

My point is: as an adult I not only have no problems with female action figures, I actually like them. But let’s also be quite candid and frank, much of that also has to do with how the general attitude towards women changes as you leave childhood behind and enter adulthood. And let’s also be honest, any action figure based on, say, Scarlett Johansson or Gal Gadot has a good chance to be something I like. Not admitting that would be dishonest. But it’s not just the actress of course, costume design also matters, and no, it doesn’t need to be skimpy or revealing at all, but interesting and the character itself is also not unimportant. I think Fennec Shand is a perfect example here… actress I like, costume design that is intricate and interesting, plus a character in Star Wars I like as well, in contrast we have Rose Tico, with the most boring costume design imaginable, a character in Star Wars I really don’t like and thus nothing I really care for and they went out of their way to make Kelly Marie Tran look as pedestrian as possible, which was probably a conscious effort by Lucasfilm or Rian Johnson. I only bought her figure “just because”. I would no longer do so now, in 2022, we talked about that in my last article. On the other hand we have Peli Motto from The Mandalorian, a figure I would buy – IF it came with three pit droids! – even though the costume design is pretty bland and the actress is not exactly Scarlett Johansson, but her bubbly and fun character on the show more than make up for that. As usual it’s never just one thing that determines whether or not I want a character as an action figure.

So while I don’t doubt McFarlane’s statement at all, I wonder how much it really applies to Star Wars these days. Or any other action figure line aimed at mostly adults. McFarlane Toys has a very successful DC Multiverse action figure line and I can absolutely see how this is more popular with kids, since you get colorful, very popular and iconic superheroes. In fact, McFarlane Toys’ DC Multiverse action figure line was the most successful action figure toyline in North America in 2021. More successful than Marvel Legends, more successful than Star Wars. And we talk about retail sales here monitored by an independent company, NPD, not something McFarnlane Toys just put out there to brag, this is based on actual sales. So you can be absolutely sure that McFarlane knows how things are in the business and what needs to be done to sell figures. But then again, he has little experience with Star Wars.

I am absolutely for more female Star Wars action figures. I wouldn’t even mind a female centric wave, depending on character choice of course. A new Slave Leia or maybe Bespin Gown Leia, Darth Talon, Queen Amidala (Theed) and Shaak-Ti would be something I would very much welcome. Any female character really with an interesting design, something that is therefore visually appealing. Not too much unlike male action figures, character design is always hugely important.

In my opinion one reason why a female centric action figure line like Ghostbusters 2016 failed so miserably is not just the fact the four Ghostbusters were women, but the character design was just lousy, not too unlike the original Ghostbusters of course, but people actually liked the original movie, something you cannot say for the 2016 version. And of course physical attractiveness is a factor you cannot ignore even if it may be very un-PC to talk about it. Few of the 2016 female Ghostbusters are what you would call “attractive”. It does sound harsh which is why it’s mostly never mentioned these days or else you are an -ist, but I think we should all be honest. There is a reason people, also here in the JTA comments, ask for a new/updated Darth Talon figure or a retooled Slave Leia and not for certain other female characters like a TBS version of Rose Tico in First Order disguise.

Then we also have things like the Marvel Legends Eternals wave, which had quite a few female characters as well, three, and that wave turned out to be a massive dud at retail. And that after the equally disappointing Shang-Chi wave that didn’t set the world on fire, There is a reason McFarlane Toys beat Hasbro in 2021 with DC Multiverse figures. The movies are certainly one factor here, character design is also a far cry from what you had in the comics, but once again, only one of those female Eternals characters is what most people would probably describe as “pretty”. And that may have been one of the factors why the line failed to sell. Apart from the pedestrian costume design of course and the movie that didn’t impress too many people.

So what about you? Would you like for Hasbro to make more female Star Wars characters, as in, a higher percentage of female characters? Which is of course not always that easy since female characters are not featured all that much in the OT, but the PT had tons of them (most of them in the background, but that means little). I am still waiting for the day Hasbro announces a TBS Zam Wesell, who would be a perfect companion for Jango Fett which they released ages ago.

In my opinion female action figures can absolutely sell well IF the line is predominantly aimed at adults, if the character looks attractive, if the costume design is interesting and if the source material is not too horrible. I would say that the source material is maybe the least important factor here, but maybe your mileage varies, but I can absolutely appreciate good character design and like the action figure even if the movie it is from is complete trash. But of course I could be all wrong. After all, I am just a random person writing an article and not someone like Todd McFarlane who actually owns a toy company and who knows exactly what kinds of people buy his action figures. So maybe even most adults still prefer male hero characters over female heroes or villains.

Thus I ask you: what about you? Do you care for female (Star Wars) action figures? Would you like to have more of them, a higher percentage? Or do you think the number we have right now is ok and that more would be a bad idea? Which female characters would you like to get as either an all new or updated version?

Watch the one hour interview with Todd McFarlane on the Shartimus Prime YouTube channel!