We’re thrilled to again participate in @SWTVC’s March Madness event! In January our readers, along with 400 other collectors submitted their top 25 most wanted TVC figures. Thanks to the help of the folks running SWTVC, we now have a compiled bracket with the top 64 figures from those 400 lists. They have been pitted head to head to see who the most wanted action figure is! You can find a hi-res blank bracket here. Once completed, share your bracket in our comments so that @SWTVC can compile the number one winners from across the board! 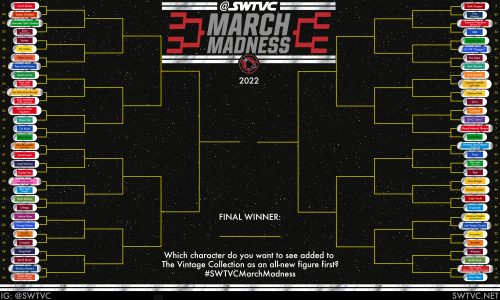 Many will enter, one will win! What do you think of these matchups?

There are some great choices and fun surprises on this year’s bracket. Which character do you want to see added to The Vintage Collection as an all-new figure first? This is unofficial and not affiliated with Hasbro or Disney in any way, but let’s get talking about what our TVC priorities are, and have some fun along the way.

These matchups were determined by the seed rankings provided by the initial data, which you can see next to each character. The top-ranked character is matched against the lowest, and it works its way towards the middle. The winner of each matchup will advance to the next round.

Until then, download your own version of the bracket (link), fill it out with what you’d like to see happen, and share it with the hashtag #SWTVCMarchMadness.

May the Force be with you!